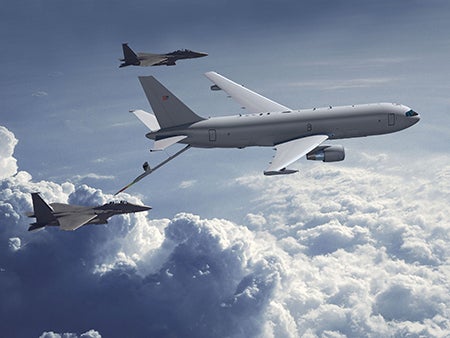 Under the contract, the company will supply the air separation modules, ozone filter and sensor sub-system for the OBIGGS, in support of the engineering and manufacturing development (EMD) phase of the KC-46A programme.

The OBIGGS are autonomous systems designed to improve the aircraft’s safety by displacing fuel tank vapours with inert nitrogen gas, therefore reducing the associated risk of fire or explosion.

Equipped with a filtration chain, a pressure and temperature controller, an oxygen sensor and air separation modules, the system enables production and flow of nitrogen enriched air (NEA) that replaces oxygen present in the fuel tank, keeping the vapours non-flammable.

Work under the contract is scheduled to be carried out at Cobham Life Support’s Centre of Excellence, located in Davenport, Iowa, US.

Cobham has delivered OBIGGS solutions for more than 3,000 aircraft, ranging from military transport aircraft and helicopters, to regional and commercial platforms, since 1985.

Developed from the Boeing 767-200ER, the KC-46 is a military aerial refuelling and strategic transport aircraft, designed to replace the USAF’s ageing fleet of KC-135 Stratotankers, which served as its primary refuelling aircraft for more than 50 years.

The USAF is scheduled to take delivery of 18 KC-46 aircraft from Boeing, which starts from 2017 and will continue until 2028, with initial flight of the first aircraft scheduled for late 2014.