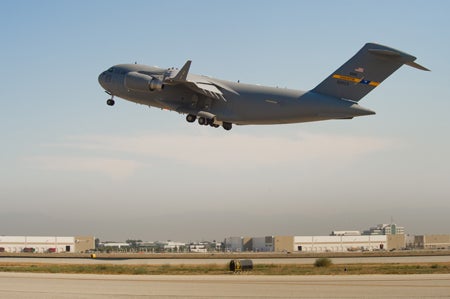 Boeing has handed over the last C-17 Globemaster III heavy-lift transport aircraft to US Air Force (USAF) during a ceremony at its assembly plant in Long Beach, California, US.

The delivery of the 223rd aircraft to the Joint Base Charleston in South Carolina comes more than 20 years after the shipment of the first one.

Boeing Military Aircraft president Chris Chadwick said C-17 aircraft serves as the ‘workhorse’ for the air force during both combat and peace missions.

"While this is the last new C-17 to be added to the air force fleet, the mission does not stop here," Chadwick said. "The C-17 delivers hope and saves lives, and with the air force in the pilot’s seat, it will continue to do so well into the future."

Boeing vice-president and C-17 programme manager Nan Bouchard added: ”We are continuing the legacy by building C-17s for our partner nations, and we will continue to work with the US Air Force to ensure their aircraft deliver top performance into the future."

Air Mobility Command commander Air Force general Paul Selva said: "Even though this is the last C-17 to be delivered to the Air Force, we know that the Boeing employees will stand behind us and all 222 C-17s we operate for many years to come."

"While this is the last new C-17 to be added to the air force fleet, the mission does not stop here."

Having completed initial test flights in September 1991, the aircraft can land on short, sharp runways, and is also capable of performing tactical airlift, medical evacuation and airdrop missions.

As well as being deployed in operations in Afghanistan and Iraq, the aircraft has also participated in humanitarian missions worldwide, including the Japanese and Indian Ocean tsunamis of 2011 and 2004, respectively, Hurricane Katrina in 2005, and the Haitian earthquake of 2010.

Image: USAF’s last C-17 aircraft on its way to Joint Base Charleston in South Carolina, US. Photo: courtesy of Boeing.