Aircraft of the Syrian Air Force: from Russia, with weaponry
Menu

As the UN considers withdrawing from Syria altogether, the nation continues to teeter on the brink of civil war. Peacekeeping efforts appear fraught and stories of deadly attacks on rebels emanate from the frontline.

The Middle East nation owes almost all of its strength to the one nation that has chiefly equipped it with an array of attack helicopters, strike aircraft and weapon systems; Russia. International condemnation has mounted and an arms embargo has been enforced on the nation, but the damage has already been done. Syria has been arming itself for the last 20 years.

"The Middle East nation owes almost all of its strength to the one nation that has chiefly equipped it with an array of attack helicopters, strike aircraft and weapon systems; Russia."

Syria’s Air Force has undergone an extensive modernisation since the 1982 Lebanon war, during which the air force suffered substantial losses. Although the full extent of the modernisation is still to be precisely clarified, owing to the nation’s penchant for secrecy, Russia emerged as the preferred importer of technology, much to the irritation of Israel and its western allies.

Syria is the largest importer of Russian-built weapons in the Middle East and, as such, has modelled its air force on an array of export combat aircraft and attack helicopters. Contracts have been exchanged throughout the past 20 years, with Syria receiving a contingent of aircraft in exchange. Although the exact numbers of Syria’s inventory are unknown, it is estimated that its air force contains 450-750 fixed wing aircraft and 170-210 rotary wing aircraft, with 70-80 of those being attack helicopters used to attack Syrian rebels in the ongoing civil conflict.

Russia’s arming of Syria has provoked a strong reaction from the international community since it became apparent that such aircraft were being used against Syrian citizens. The US has since accused Russia of "playing a dangerous role" by supplying arms to Syria amid ongoing clashes, with US Department of State spokeswoman Victoria Nuland saying: "The US has been pushing Russia to consider the wisdom of its own arms sales to Syria, for arguably a decade, and certainly most acutely since this crisis began, and particularly since the assault in Homs. So our message to them is very clear with regard to the dangerous role that they are playing in fuelling the fire."

Syria’s fleet of MiG-25 aircraft consists of two variations – the nation possesses 16 MiG-25PDs, the interceptor variant, and 25 MiG-25RBs, the reconnaissance bomber version of the aircraft. One of the largest fleets within the Syrian Air Force is its fleet of MiG-23 aircraft, with the nation thought to possess 146 MiG-23s. The 146 are spread across a number of variants, comprising of first and second generation MiG-23s, as well as the ground attack MiG-23BN option. 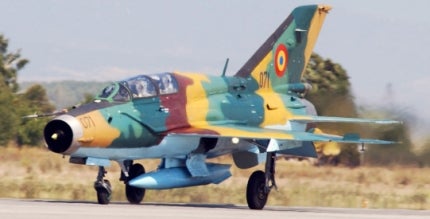 Syria have used MiG-21 aircraft during conflicts with both Israel and Egypt. Image courtesy of MSGT Billy Johnston, USAF.

Syria is said to have 19 MiG-29s in operation from the original order of 24, with an estimated 140-220 MiG-21 aircraft remaining following their involvement in conflicts with both Egypt and Israel. The most notable development of Syria’s use of MiG-21 aircraft was the defection of a Syrian Air Force colonel who made his escape to Jordan using his MiG-21. 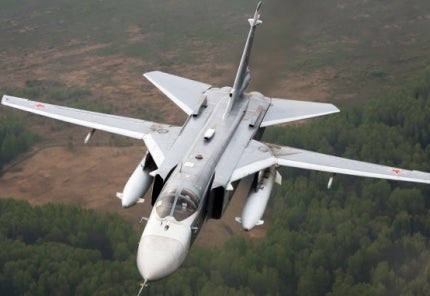 Aside from its fleet of Mikoyan-Gurevich-built aircraft, Syria also has a number of Sukhoi jets, with Su-22 and Su-24 aircraft currently in service. Syria is thought to have around 20 Su-24 aircraft; however the export version suffers from downgraded avionics and weapon capabilities in comparison to the Russian version. 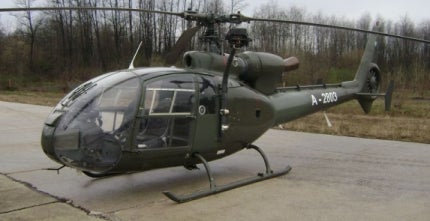 The multipurpose Gazelle helicopters are Syria’s only helicopters not to originate from Russia. Image courtesy of Bosanska Krupa.

The only non-Russian helicopter acting within the Syrian Air Force is the SA-342 Gazelle, purchased from France in 1977. Syria ordered for 17 of the aircraft in response to Israel’s acquisition of Bell AH-1 Cobra helicopters. Its Gazelle helicopters are equipped with AS-12 anti-tank missiles and have proven to be adept at fighting armour, with the helicopter squadrons successfully eliminating various Israeli armour squadrons during the Yom Kippur war of 1973. 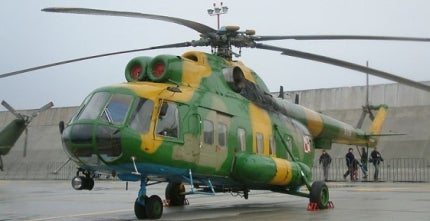 Although primarily used for transport, Mi-8s are reported to have been used by Syria for attack purposes. Image courtesy of Radomil

Aside from a small French contingent of helicopters, much like the rest of its air force Syria’s fleet of attack helicopters is exclusively of Soviet origin. It possesses a large number of Mi-8 aircraft that, although designed predominantly for transport operations, have been equipped with weaponry and used as impromptu gunships in recent weeks. Many observers have noted the use of Mi-8 Hip helicopters against Syrian rebels, however much of this work is said to be carried out by the more deadly Mi-25.

The Mi-25 helicopters carry a significant threat due to their extensive weaponry. The gunships, an export version of the Mi-24D Hind helicopter used by the Russian Air Force, possesses a four-barrel Yak-B machine gun under the nose, as well as four 57mm rocket pods, four SACLOS 9M17 Phalanga anti-tank missiles and various other bombs and weapons.

International condemnation of Russia escalated after the vessel MV Alaed had its insurance withdrawn by the Standard Club for the alleged shipping of refurbished helicopters to Syria. The withdrawal of insurance forced the ship to return to the port of Murmansk, with Russia forced in to an admission.

"Syria’s Air Force has undergone an extensive modernisation since the 1982 Lebanon war, during which the air force suffered substantial losses."

Russia foreign ministry spokesman Alexander Lukashevich confirmed the allegations, stating: "The ship Alaed sailed on June 11 with a cargo including Mi-25 helicopters which are the property of the Syrian side."

Russian foreign minister Sergei Lavrov, also confirmed the ship’s cargo, adding that the three helicopters onboard had been repaired by Russia for the Syrian Air Force. Perhaps more alarming, however, is the presence of air defence equipment for Syria, given the increasing likelihood of UN intervention.

Russia’s admission has not appeased US Secretary of State Hillary Clinton however, who has continued to accuse Russia of sending Syria attack helicopters rather than refurbishing its existing fleet.

The UN has been forced to suspend its mission in the nation following significant surges in violence, with its team increasingly likely to be withdrawn from Syria for their own safety. Any such withdrawal is likely to thrust the nation into further confusion, with a peaceful conclusion looking far from salvageable.