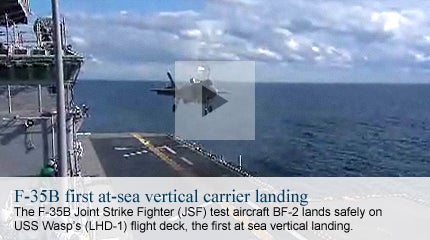 F-35 Lightning II
The F-35 Lightning II joint strike fighter (JSF), is being developed by Lockheed Martin Aeronautics Company for the US Air Force, Navy and Marine Corps and the UK Royal Navy.

“The Sukhoi PAK FA, developed for use by the Russian Air Force and Navy, uses a custom built engine, the 117.”

The first origins of the F135 lie in Lockheed Martin Skunk Works’ attempts to develop a stealthy short take-off and vertical landing (STOVL) fighter for the US, as part of DARPA’s ASTOVL programme in 1986. A concept aircraft and propulsion system was developed and patented by Lockheed’s chief aeronautical scientist Paul Bevilaqua.

Components from F119 and F100-229 engines were used to create the F100-229-plus demonstrator engine, which went onto prove Bevilaqua’s lift fan concept and ultimately lead to the development of the F135 for use on Lockheed Martin’s F-35.

The STOVL variation of the F-35, to be used by the US Marine Corps and UK Royal Navy, used Lockheed Martin’s patented Rolls-Royce LiftSystem, developed by Rolls-Royce.

“The F135 team responsible for the development of the engine consists of Pratt & Whitney, Rolls-Royce and Hamilton Sundstrand.” 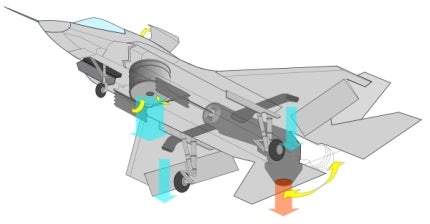 “A rival to the F135, the General Electric and Rolls-Royce-built F136 had been in development up until December 2011.”

More competition will come from China’s Chengdu J-20, although the aircraft is some way behind its rivals and, subsequently, detailed information regarding engine performance is sparse. Although it was initially reported that Russia’s 117 engines could be provided for the aircraft, it has also been reported that China has chosen to indigenously develop high thrust turbofan engines, fitted with thrust vector controlled nozzles to power the aircraft.