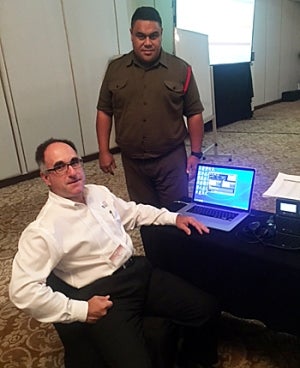 More than 300 military and civilian communications specialists from 21 Indo-Asia-Pacific nations came together for the United States Pacific Command (USPACOM) programme known as PACIFIC ENDEAVOR, from 31 August to 11 September 2015.

This annual humanitarian and disaster relief event is the culmination of 12 months of planning workshops and is designed to strengthen relationships with allies and partners by testing the communications response to a natural disaster.

The 2015 event was based around the crisis response to a fictitious 7.2 magnitude earthquake in the Philippines capital of Manila.

Sixteen nations volunteered to bring equipment and participate in the assessments, and Barrett Communications equipment was brought by four of the nations who participated. Initially Interoperability Assessment was stalled due to interoperability issues with HF data.

With each of the participating nations supplying their own equipment, multiple data waveforms were unable to interoperate.

Mr John Rosica, President of NVIS Communications, the Barrett System Integrator for the US market also attended the event in his capacity as a US Army Military Auxiliary Radio System (MARS) member and was called on to assist the Interoperability Assessments to overcome the HF data issues.

By selecting a single data environment, multiple data waveforms could operate over HF. The Clover modem and Barrett 2020 email and data system installed in the Barrett equipment was used as the common environment to transmit and receive the emails to create a local area network without connection to the internet.

Mr Rosica commented: "The other participating nations were not familiar with the Barrett 2020 email and data system but found it easy to operate as they were connected to it via their own familiar mail client software such as MS Outlook or Lotus Notes.

"This benefits the operator as there is not a new ’emergency system’ to use when the internet connection is no longer available, due to natural disaster or another event. From their perspective it is their everyday system just routed via HF rather than an Ethernet connection."

Major Mohammad Anisur Rahman of the Bangladesh Army attended PACIFIC ENDEAVOR and operated his recently procured Barrett PRC-2090 base station as part of the event.

Major Rahman commented: "The ability to transfer email over HF with the Barrett 2020 is such an enormous and useful option of the radio. It was a great experience of mine to exchange emails from a radio station that is not connected to the internet."

Mr Greg O’Neill, managing director of Barrett Communications said: "Our equipment is designed to be intuitive to use and simple to set up, so it is pleasing to hear this feedback about how straightforward it was to interoperate Barrett equipment with the seven other OEM HF suppliers who participated at this event."

"Mr Rosica has stood out in support of the programme and we greatly appreciate the support he gave all participating nations as part of the Interoperability Assessments and overall PACIFIC ENDEAVOR programme.

"From what we have learned from the Interoperability Assessments, a new pre-event has been scheduled for the beginning of 2016 where attending nations and vendors will come to a planning session in advance to increase knowledge and also architecture methods of interoperability prior to PACIFIC ENDEAVOR 2016.

"This would be similar to other training exercises that friendly nations’ militaries conduct to facilitate full interoperability."