Barrett Support the Malaysian Ministry of Health During Flooding 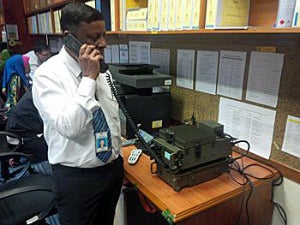 In early 2015, Malaysia was hit with severe flooding. The east coast states of the Peninsula were the most severely affected, with more than 100,000 people being evacuated.

This was the worst flooding this region has seen in recent years and many of the emergency services were not ready to cope with the situation.

With communications infrastructure damaged, coordinating the aid and emergency supplies was put at significant risk. At the height of the floods, radio communications through amateur radio operators assisting the government agencies in their relief aid was seen to be the most effective and reliable way of communicating.

The priority was to re-establish communication with a hospital in Temerloh, in the state of Pahang, which had been completely cut-off from thePublic Switched Telephone Network (PSTN).

Tactical Communications Sdn Bhd provided Barrett HF radios; a PRC-2090 HF base station was installed at the Crisis Preparedness and Response Centre (CPRC) at the MOH Headquarters in Putrajaya and a second radio, a Barrett 2050 HF base station, at the hospital.

The hospital station was run by a staff member who is also an active amateur radio operator.

Managing Director of Tactical Communications Sdn Bhd, Mr Zakaria Dahili said: "The situation at the Temerloh Hospital was urgent. There were patients at the hospital that required specialised treatment that could no longer receive their treatment at Temerloh Hosptial.

"Once radio communications was established, helicopter air lifts were arranged to transport these patients to other hospitals."

An additional five Barrett 2050 Base Stations were donated by Barrett Communications to be installed at five more rural hospitals in other states in the region. Tactical Communications Sdn Bhd remained committed to assisting the MOH should a further need eventuate.

Dato’ Dr Fadzilah binti Kamaludin, Head, Office of Deputy Director General of Health, Ministry of Health Malaysia, commented in an email: "Thank you for your contribution and cooperation. Please extend our sincere appreciation to all members of the Persatuan Amateur Radio and Barrett Communications. The floods have now receded, and hope we can work again in the future" (translation)."