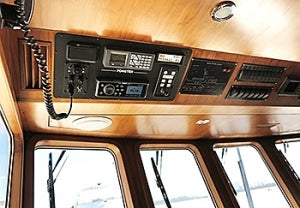 Today marks the 400th anniversary of the landing of the first known European visitor to Western Australia, Dirk Hartog and the ship crew of the Eendracht.

In commemoration of the event the South of Perth Yacht Club and the Fremantle Sailing Club, with assistance from Geraldton Yacht Club, will be conducting a yacht race and cruise to Dirk Hartog Island, which is in the Shire of Shark Bay in Western Australia, 800km north of Perth.

Barrett Communications has long been associated with all Western Australian yacht clubs and during past events has provided high-frequency (HF) communication equipment to meet statutory race requirements and ensure the safety of race participants.

For the Dirk Hartog event, Barrett has provided a HF marine radio installation to the radio relay and safety escort vessel MV Fonster.

This installation includes a 2050 HF transceiver with an internal modem and the 2020 email fax and data system. For this event all communications will be transmitted to a HF data base station at the Barrett Communications head office in Bibra Lake, Western Australia and then onwards via the internet to the race coordinators.

The radio equipment supplied allows for race organisers to receive and transmit both voice, data and email communications via HF to and from the radio relay and safety escort vessel and to communicate with the relevant clubs for their information or safety assistance.

The race and cruise event is in four stages, the first leg departs from Fremantle to Geraldton on 15 October, then from Geraldton to Denham from 20 October. Event celebrations including a concert and the 16th Century Dress Captains Ball together with many other food and music events will be held in Denham from 20-24 October. The 25 October will be the commemoration landing at Dirk Hartog Island, with the final leg from Denham to Fremantle departing 26 October.

The radio relay and safety escort vessel will be responsible for all stages of sailing and will be conducting regular radio schedules with all vessels in the fleet. The race is open to Category 2 racing yachts and cruising yachts. The organisers are expecting approximately 30 vessels to be involved.