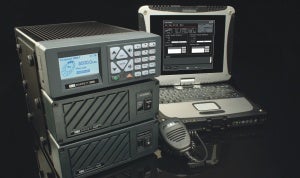 Barrett Communications is pleased to announce recent certification and approval from the National Telecommunications and Information Administration (NTIA).

"Not only is it one of the easiest to provision and deploy but it is probably the easiest to use of any competitive product in the marketplace today."

This approval was received following more than seven months of comprehensive evaluation of the Barrett 2050, 2020 and 2060 products by several US federal government agencies. This evaluation was conducted across the Western US and includes locations in California, Arizona, Washington and Oregon.

Mr Rosica worked with the US federal government agency that took the lead in the evaluation and pilot tests. He completed one week’s training of all personnel in Washington and assisted with the deployment of equipment to all test areas.

The test and evaluation process was very thorough, including multiple weekly exercises with all participating members with voice, data (chat), email, internet gateway and telephone patching calls to and from each other and to the hub station in Washington.

The evaluation stress tested all nodes and was conducted at various times of the day and night to truly emulate the conditions of HF, as well as test common operational procedures for backup or failover communication systems. All test documentation was submitted to NTIA for final approval which was granted in September 2012.

Following the NTIA approval, Mr Rosica commented: "Several participating US government agencies involved with the NTIA approval process have since pursued acquisition of the Barrett solutions tested to give them the robust HF capabilities they need to back up their primary communications to meet US presidential directives mandating the securing of their communications operations from manmade or natural disasters."