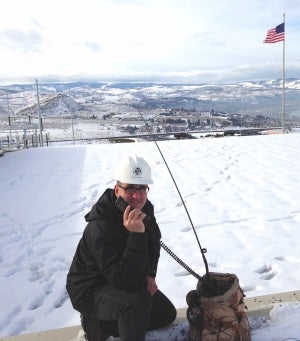 BPA’s staffs operate and maintain the extensive high voltage transmission system (about 15,000 miles) in some of the most rugged and difficult to access territory in continental United States. In this environment, reliable voice communication is essential for the safe operation and maintenance of the system. In recent years cellular telephones and an extensive microwave/fiber backhaul supported VHF radio system have provided the BPA’s communication needs.

BPA’s service territory is also subject to a number of significant natural risks including earthquakes, tsunamis, volcanic eruptions, severe winter weather and flooding, which many cause long term power outages throughout the region. In addition to this, other potential threats to the system have been identified, including sabotage, accidents and terrorism. BPA’s existing voice and data administrative communications systems are highly dependent on connective infrastructure and line-of-sight radio communications. They are, therefore, subject to gaps in existing areas of coverage, and to potentially widespread degradation of the service during significant disruptive events.

Recognising these gaps, BPA’s Transmission Services Emergency Manager, Nelson King, has been working on obtaining management approval to develop and implement an emergency high frequency (HF) radio communication system. Due to the fundamental physics of HF radio propagation, HF networks are independent of infrastructure and will incur no further network charges once the radio equipment is procured. The system developed for BPA incorporates Barrett Automatic Link Establishment (ALE), a common HF option that provides a reliable and rapid method for calling and connecting during constantly changing environmental and radio conditions. The system is user-friendly and allows HF operation with minimal user training. In the early years of BPA’s 75 years of operation, an extensive HF radio system was used, however in the early 1960’s it was replaced by telephone and VHF radio.

In 2011, Region X of the Federal Emergency Management Agency (FEMA) was working with Barrett Communications and system integrator, NVIS Communications, to evaluate the Barrett HF radio communications equipment for NTIA certification. The subsequent NTIA approval and the very positive results of this evaluation facilitated BPA’s management to approve and implement an Emergency HF project for their transmission service.

David Rudawitz, a project manager and HF communications expert working for Nelson King, was tasked with moving this project from initial scoping to commissioning. He conducted a detailed analysis of HF products and vendors in the US market and, after completion of his competitive analysis, Barrett Communications was selected. In addition to cost and performance criteria, NTIA certification was also a key element in vendor selection. NVIS Communications of Morgan Hill California was awarded the contract as the system integrator.

Due to the relative size of the BPA service territory, Near Vertical Incident Skywave (NVIS) antenna configurations were determined to be the best antenna configuration. A NVIS configuration focuses the radio transmissions into an omnidirectional coverage area providing highly reliable operations out to about 500 miles. After extensive testing of various antenna types, BPA selected the Barrett 912 multi-wire broadband for the base station installations and the Barrett 2019 automatic tuning antennas with the NVIS kit for the mobile vehicle installations.

Field testing by BPA telecommunications engineering staff and Mr. John Rosica, President of NVIS Communications, was conducted to evaluate each proposed radio site and develop installation specifications. Field tests were conducted with the Barrett 2050 mobile vehicle and Barrett 2090 HF Manpack transceiver using several antennas including the 912, 2019 and rapid deployment broadband antenna. Each site was different, although almost all had the common issue of being located at very large, high voltage (230K to 500K volt), substations. Initially there was the concern of significant radio interference from the substation equipment and transmission lines. Of major concern was the station located in Dalles, Oregon, which operates the 1 million volt Celilo DC Converter, operating both in rectifier (converting AC to DC) and inverter (converting DC to AC) modes. Extensive field testing confirmed that the Barrett 912 antenna, in an NVIS configuration along with the meticulous maintenance performed by BPA personnel, reduced this interference to be negligible.

The integration of the emergency HF system with the existing Power Dispatch Center’s Avtec communications control units was accomplished by using the Barrett 2060 telephone interconnect. This allowed the HF system to operate as though it were an additional telephone line patch into the Avtec system, thereby making it compatible with the BPA VHF radio system.

Due to the engineering effort and cost, the project is being implemented in phases, with the initial phase (13 base and mobile radios, the dispatch center base radios and the VECC) completed in June 2013. BPA is also investigating movable, mobile radio configurations using existing trailer hitches. This will allow a mobile radio to be shared amongst several vehicles with a simple procedure to move between vehicles. Future plans include the addition of data transmission capabilities and the possible expansion of the system to include BPA business partners and customers.

This comprehensive HF system provides BPA with a reliable, infrastructure independent, emergency communication system that will maintain voice communications under the most demanding and disruptive situations. BPA is currently unique within the power industry with the deployment of this capability.