In Association with Barrett Communications

In the event of a disaster, one of the most important services emergency response organisations need is the ability to communicate. Without effective communications infrastructure, coordinating and managing the after-effects of the disaster becomes incredibly difficult to handle.

As with all business planning, communication resilience needs to be clearly considered to identify all perceived eventualities and risks to maintain business continuity. The following are a basic set of principles and planning points when working with end users to determine what and how a viable network is to be designed, implemented, and commissioned. Download the whitepaper to discover the many compelling reasons to act now.
By Barrett Communications 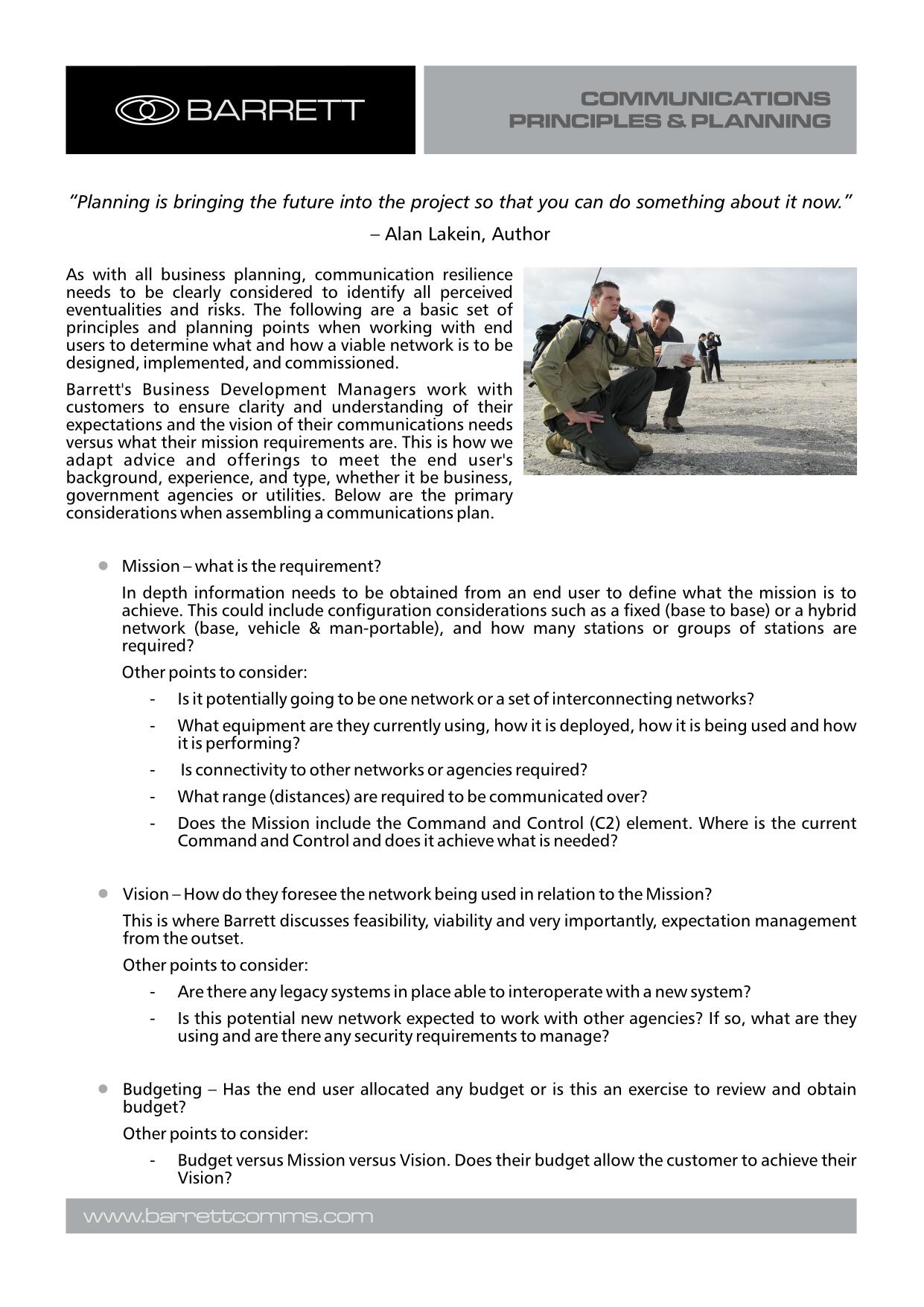 Thank you.Please check your email to download the Whitepaper.

According to the US National Centers for Environmental Information, which tracks and evaluates climate events in America and the rest of the world, there have been 310 weather-related disasters since 1980 in the US, where the economic costs were more than US$1bn.

The total cost of these 310 events exceeds $2tn. In 2020, there were 22 such disasters, and in 2021, there were 20, costing more than $1bn! The government agency even has a separate tracking and recording system for these, called ‘billion’ events.

One such disaster was Hurricane Zeta, which hit Chalmette, Louisiana on October 29, 2020. Affected residents had to rely on mobile phones for communications, at least until their batteries ran out. Power did not return for some for more than 14 days, and even when it did return, it was intermittent, so they could not rely on the internet for news and other communications.

No power meant no data centre operations. Ground-based infrastructure like electricity poles and fibre optic cabling cabinets were damaged, and the situation was made more serious by failing satellite signals.

Let’s not forget Hurricane Ida, second only to Hurricane Katrina in its ferocity and destructive potential. Beginning in the Caribbean Sea three days earlier, it made landfall and began ravaging Port Fourchon, Louisiana on Sunday, August 29, 2021.

The up to 150mph wind speeds devastated all that stood before them and brought torrential rain, tornadoes, flash floods, and a storm surge along the coasts of Louisiana, Mississippi, and Alabama. The power grids of both Louisiana and Mississippi failed, leaving more than 1m people without electricity. The total approximate cost of Ida was $65bn.

And the IPCC says that because warming oceans provide fuel for tropical storms or hurricanes to develop, this rapid intensification in tropical storms has risen over the last 40 years. They also say that as oceans continue to become even warmer, the incidences of severe tropical storms will increase.

Wildfires are breaking records globally. Last year, they caused more than two million acres of land to be completely destroyed. Homes and businesses were devastated, with thousands of families displaced. To add to the concern, they are getting worse, and their seasons are lasting longer.

Last year saw wildfires ignite in some of the coldest regions of the world. The Siberian city of Yakutsk, the world’s coldest city with average temperatures of a balmy -42°C, suffered a severe wildfire season in 2021.

Due to the nature of wildfires, which may begin with a small brush fire and end up as a conflagration engulfing thousands of acres in a matter of hours, in such circumstances quick and comprehensive communication between the population and emergency services needs to be robust and immediately available. They would need to provide effective information and instructions to people in danger from situations created by the wildfire.

Mitigating the effects of this, and other weather-related disasters, requires the relevant authorities to have effective plans and processes in place that can be activated at a moment’s notice.

A critical element of these is a multi-channel mass-notification system that can reliably reach populations in affected areas at speed. Another element, which is just as important, is informing people who live in areas that might suffer from these disasters of the emergency communication channels, so they are aware of what to do in the event something happens.

In the last decade, Barrett Communications‘ equipment and services have made them a partner of choice for a diverse portfolio of organisations. Here, we talk about a few briefly.

In 2020, the island nation of Vanuatu approached Barrett to help modernise Vanuatu Police’s presence and disaster management programs. The three-year project was under the auspices of the Vanuatu-Australia Defence Cooperation Program.

ALE helps to establish voice and data communication between stations, while the DV filters out any ‘white noise’ typically associated with HF. The automated nature of these functions meant the user requires little training to use them.

Vanuatu experiences a lot of cyclones, which can result in network systems and mobile phone towers being damaged, so it needed a communication platform that was not dependent on ground- or tower-based infrastructure. Barrett’s radio equipment allowed the police headquarters to remain in contact with its National Disaster Management Office Headquarters in Port Vila via the High Frequency (HF) network.

China’s Ministry of Emergency Management approached Barrett in 2020 for a HF radio-based communications system that was needed by its Bureau of Fire and Rescue and Bureau of Forest Fires, which is responsible for huge areas that had little in the way of ground-based or mobile network infrastructure.

The system that they received was Barrett 4050 HF SDR Transceiver with DV and ALE as, apart from being the best platform for the job, the solution had built-in language options for Chinese, French, Spanish, Russian and Arabic as standard.

Villa Santa Lucia, a town in Patagonia, Chile, was hit by a mudslide in December 2017. Barrett’s local representative in Chile, Skytel Telecomunicaciones, installed HF radio communications equipment into a number of ambulances that were part of the emergency response team.

Chile’s Urgent Medical Attention Service (SAMU) quickly realised how the Barrett HF system simplified their communications in the rugged terrains they operated in and decided to add HF systems as an integral part of their emergency disaster response plans.

Barrett designed and installed an HF network system to carry voice, email and data signals, together with real-time location tracking of vehicles. This allowed SAMU’s entire fleet of emergency vehicles to communicate over the 100,000 square kilometres area it was responsible for, and also connected them to the nearest regional hospitals and the Health Ministry in Santiago, Chile’s capital.

Emergency communication networks that include HF radio systems as an integral part are more robust because, in the event of a disaster, they can switch quickly to a platform that does not need ground-based infrastructure that might become damaged and inoperable.

The upfront cost of an HF system from Barrett is not without cost, but this needs to be balanced against the certainty of having a failsafe communication platform that will be effective during an emergency. And the equipment itself will, with regular maintenance, last for many years.

The example of Vanuatu’s HF radio emergency network modernisation, mentioned above, was of a system Barrett had supplied to the country 20 years earlier. That network still worked, but they wanted to access some of the more recent capabilities in HF technology (location tracking, digital voice, data and email).

Moving forward, there is increasing interest and uptake of HF radio-enabled emergency communication networks around the world. Systems relying on mobile cellular, VHF, UHF radio and internet platforms have demonstrated their value over recent decades, but organisations globally have realised that without HF networks, their plans could still fail.

As with all business planning, communication resilience needs to be clearly considered to identify all perceived eventualities and risks to maintain business continuity. The following are a basic set of principles and planning points when working with end users to determine what and how a viable network is to be designed, implemented, and commissioned. Download the whitepaper to discover the many compelling reasons to act now.
By Barrett Communications