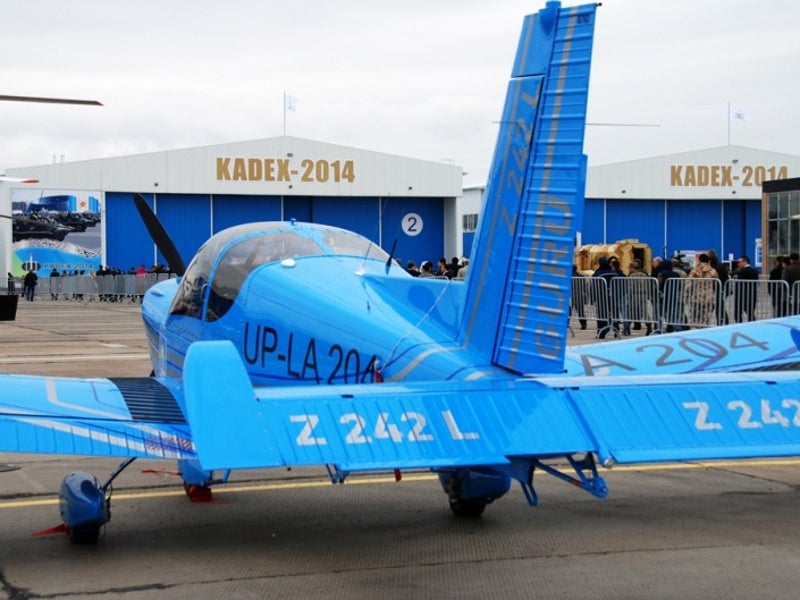 The Z 242 L Guru is a twin-seat trainer and aerobatic aircraft manufactured by ZLIN AIRCRAFT for basic and advanced training, as well as aerobatic training in civil and military air schools.

The aircraft can be used to conduct night and IFR flight training, aerobatic flights, glider and banner towing missions.

The Bolivian Air Force placed a contract with ZLIN AIRCRAFT for nine Z 242 L trainers in May. The contractual scope also includes the delivery of instructor training service and technical / parts support. The first two aircraft were delivered to the Bolivian Air Force in November.

The under-fuselage is fitted with a fixed tri-cycle landing gear with high ground clearance to protect the lower aircraft components against impact of small objects when landing on unpaved runways. The landing gear has the ability to absorb unnatural loads during taxiing, take-off and landing even on rough surfaces.

The aircraft has a small wingspan, which increases manoeuvrability during taxing on the surface, while the design of the rear aircraft section enables the operators to conduct landing training.

The aircraft has a length of 6.94m, wing span of 9.34m and a height of 2.95m. The empty weight and maximum take-off weight of the aerobatic trainer are 745kg and 970kg respectively.

The Z 242 L integrates a spacious cockpit housing two crew members including an instructor and a student pilot. The sliding bubble canopy on the cockpit offers exceptional visibility. It is equipped with emergency release mechanism for increased crew safety.

"The aircraft can be used to conduct night and IFR flight training, aerobatic flights, glider and banner towing missions."

The cockpit can be installed with VFR day / night or IFR communication and navigation equipment according to the operational and training requirements of the customers. The advanced flight controls in combination with responsive handling qualities meet the most demanding requirements of military pilots.

The aircraft has a maximum rate of climb of 5.5m/s and maximum speed of 236km/h. The two 60l fuel tanks provide the aircraft a maximum range of 495km. The aerobatic trainer requires a take-off distance of 210m.