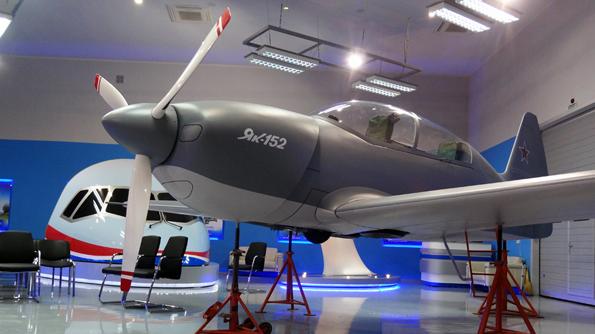 The Yak-152 is a new-generation primary trainer aircraft developed by Yakovlev Design Bureau, a part of Irkut Corporation. The aircraft is intended for the Russian Ministry of Defence, paramilitary sport organisation DOSAAF (Volunteer Society for Cooperation with the Army, Aviation, and Fleet), and other organisations of the Russian Federation.

The aircraft is intended to provide primary pilot training, professional selection, and occupational guidance for future military fighter pilots. It will be included in the UTK-Yak training complex, which consists of the Yak-130 combat trainer, computer display classrooms, PC-based procedural simulators, and functional simulators.

Yakovlev Design Bureau is the potential prime contractor for the Yak-152 aeroplane. Federal arms supply agency Rosoboronpostavka began a tender in March 2014 to complete development of a Yak-152 piston training aircraft at an estimated cost of RUR300m ($8.32m). A mock-up of the Yakovlev-152 trainer was made by OSKBES MAI in September 2014.

The Yak-152 aircraft development programme includes production of four prototypes, with two are aimed for flight trials, one for static tests and the final for fatigue testing. . The first prototype achieved its maiden flight in September 2016. The first Yak-152 trainer aircraft is anticipated to be operational by 2017.

Irkut received a contract from the Russian Ministry of Defence (MoD) in June 2015 to supply approximately 150 Yak-152 aircraft by 2020.

The wings are attached with trim rudders and ailerons to provide improved aerodynamic efficiency. The aircraft features a retractable tricycle landing gear consisting of a nose wheel and two main wheels, with low-pressure tyres and shock-absorbing properties, allowing the aircraft to take-off and land safely on small unprepared airfields.

Operated by a single pilot, the cockpit can accommodate two crew members in tandem configuration. The pupil-pilot seat is located in the front section, while the instructor is seated at the rear. The aircraft uses the SKS-94M ejection system to provide safe escape for pilots in case of an emergency. It is also installed with heating and ventilation systems.

The Yak-152 primary trainer aircraft can be equipped with advanced flight navigation, radio communications, and targeting equipment to provide high-reliability and enhanced training capabilities for the pilots.

The Yak-152 is powered by a single M-14X turboprop engine with a generating capacity of 360hp.

Its propulsion system provides a stalling speed of 100km/h and a maximum speed of 500km/h. It offers a maximum range of 1,000km and can carry out training missions for up to 10,000 hours. With a maximum take-off distance of 175m and a maximum landing run distance of 360m, it can reach a maximum altitude of 4,000m.

The primary trainer aircraft will have a calendar life of 30 years and a service life of 10,000 hours. The maximum and minimum load factors are 9g and -7g respectively.