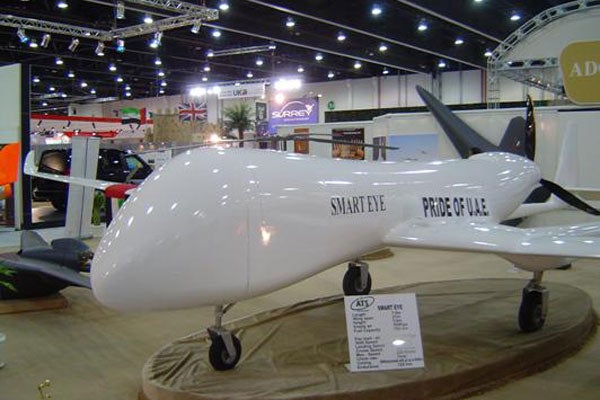 Yabhon Smart Eye is a medium altitude long endurance (MALE) unmanned aerial vehicle (UAV) designed and manufactured by ADCOM Systems, a company based in the UAE.

The UAV is designed to conduct strategic and tactical operations, and is suitable for a variety of missions, including near real-time (NRT) combat assessment, battle damage assessment (BDA), border surveillance, reconnaissance, intelligence preparation of the battlefield, humanitarian aid, communications relay, and other special operations. It can also be used for protecting critical national infrastructure.

The Yabhon Smart Eye UAV is manufactured at ADCOM’s facility in Musaffah, Abu Dhabi. It was exhibited first at the International Defence Exhibition and Conference (IDEX) 2009 held in Abu Dhabi.

Bayraktar is a mini UAV produced by Baykar Makina for the Turkish Armed Forces.

The Smart Eye is fitted with glider-like wings at the front section. The wings have a high glide ratio of 30:1. The tail assembly is mounted with two vertical tail fins. A three-bladed propeller is mounted in the middle section.

The unmanned aerial vehicle has a length of 7m, height of 2m and a wing span of 21m. The empty weight is 450kg and the maximum take-off weight is 1,000kg. The fuel storage capacity is 900lt and the payload carrying capacity is up to 550kg.

An advanced ADCOM-3D flight control unit (FCU) is incorporated to facilitate autonomous operation by providing independent inertial measurement unit (IMU) and global positioning system (GPS) navigation services for the UAV. The FCU is capable of controlling up to 16 different payload systems. The UAV is capable of generating mission plan prior to flight. It also supports online mission profile update and recording.

The Yabhon Smart Eye MALE UAV can carry two gyro-stabilised payload platforms, synthetic aperture radar, and sonar terrain avoidance system. It can also carry up to four pods of 100kg capacity each under the wings.

"The main engine is complemented by an auxiliary engine for improving the UAV’s performance."

The UAV can be optionally equipped with a variety of payload sensors and signals intelligence systems to meet the varying mission requirements.

Propulsion and performance of the UAV

The Yabhon Smart Eye unmanned air system is driven by a primary pusher-propeller engine, which is available in output power ratings of 80hp / 100hp / 115hp. The main engine is complemented by an auxiliary engine for improving the UAV’s performance.