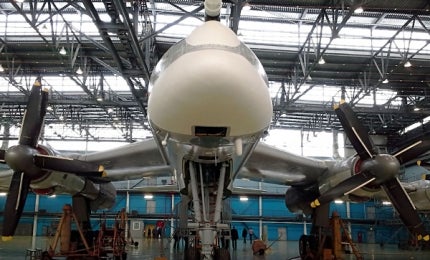 The Russian Defence Ministry intends to procure 20 modernised bombers by the end of 2016. The aircraft are expected to remain in service with them until 2040.

A Tu-95MS prototype made first flight in September 1979. Serial production of the bomber was carried out at Kuibyshev Aircraft Works (now OJSC Aviakor Aviation Plant) in Samara between 1981 and 1992. The aircraft have been deployed by the 121st Heavy Bomber Regiment at Engels Air Base and the 73rd Heavy Bomber Aviation Division at Ukrainka Air Base.

"The Russian Defence Ministry intends to procure 20 modernised bombers by the end of 2016."

In December 2014, Tupolev handed over two upgraded Tu-95MS strategic bombers with improved avionics and flying efficiency to the Russian Air Force, as part of the state defence order. A further delivery of upgraded Tu-95MS was made in January 2015.

The Tu-95MS strategic bomber features high-aspect ratio spar wing design and an improved, all-metal airframe. It is capable of engaging major stationary enemy targets under extreme weather conditions both during day and at night.

The aircraft is 49.6m-long and 13.3m-high, and is equipped with semi-monocoque fuselage and a retractable tricycle landing gear consisting of steerable twin-wheel nose unit and four-wheeled main units. Its maximum take-off and landing weights are 185t and 135t respectively and its maximum payload capacity is 20,000kg. The wings are swept back at 35° and the wing span is 50.05m.

The cabin in the front section of the fuselage accommodates a crew of seven, including a pilot and a co-pilot.

The Tu-95MS Bear-H aircraft is armed with two Gryazev-Shipunov GSh-23 twin-barrelled, 23mm automatic cannons at the rear for self-defence against airborne threats. Each cannon has a rate of fire of 2,400 rounds a minute. Six 2,500km-range Kh-15 air-launched cruise missiles are carried in the drum launcher.

The Tu-95MS-6 variant can be equipped with six Raduga Kh-55 (AS-15) subsonic air-launched cruise missiles in a rotary launcher, whereas the Tu-95MS-16 variant can carry 16 Kh-55 missiles externally.

The aircraft can be further modified to carry up to eight Kh-101 air-launched cruise missiles or 14 Kh-65 anti-ship missiles.

Avionics onboard the Tu-95MS Bear-H aircraft

The B-1B Lancer was developed by Rockwell International, now Boeing Defense And Space Group, and is the US Air Force long-range strategic bomber.

The aircraft is also fitted with Leninetz Obzor-MS clam pipe navigation and attack pulse-doppler radar, and Mak-UT missile approach warning system infrared (MAWS). It can be upgraded with new equipment for improved reliability.

The SPS-160 Geran series jammer aboard the Tu-95MS bomber provides self-defence from guided missiles. The bomber’s aerodynamic design allows it to fly at high-speed at a safe altitude. Two large fairings are fitted on the wings to reduce the drag.

The Tu-95MS combat aircraft is powered by four NK-12MP turboprop engines, driving one eight-bladed, counter-rotating AV-60N auto-feathering propeller each. Manufactured by Kuznetsov Design Bureau, the engine has a take-off power of 15,000bhp and a pressure ratio of 9.7.

Internal fuel capacity of the aircraft is 84t. Fuel is stored in four tanks integrated in the outer wings, two centre wing tanks, and in the central fuselage tank. An air-to-air refuelling probe is fixed on the nose.