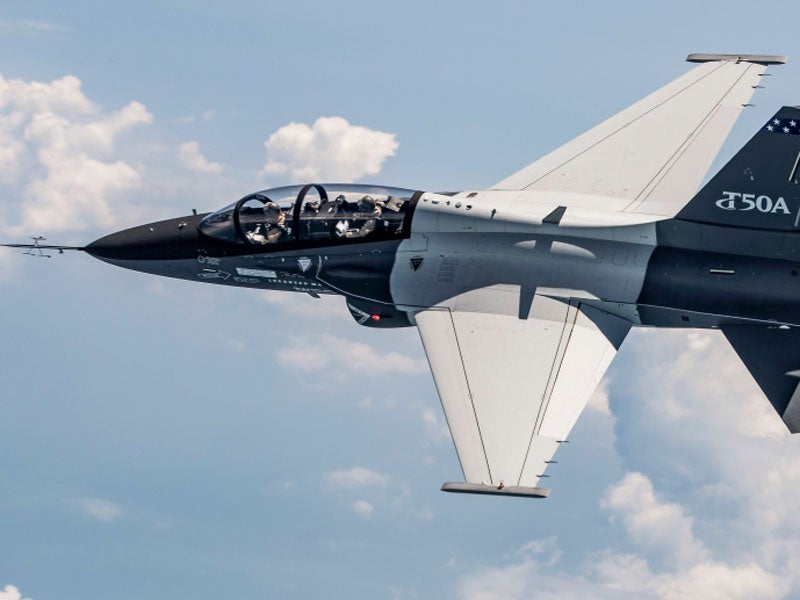 T-50A is an advanced trainer jet aircraft developed jointly by Lockheed Martin and Korea Aerospace Industries (KAI) for the US Air Force’s T-X Advanced Pilot Training (APT) competition. It is an advanced version of the T-50 trainer aircraft.

The T-50A prototype made its public appearance in December 2015. Lockheed Martin and KAI successfully conducted the maiden test flight of the first T-50A aircraft in June 2016. The second T-50A configured aircraft completed its first flight at Sacheon airfield in South Korea, in July 2016.

The APT programme is intended to replace the ageing T-38 Talon jet trainers. The USAF plans to sign a contract for the acquisition of 350 T-Xs to replace the 431 T-38s.

The USAF intends to issue a request for proposal for the T-X programme in December 2016. The new T-X trainer is anticipated to achieve initial operational capability by 2024.

Other contenders for the T-X programme include the Boeing / Saab team, and Northrop Grumman, which are offering new designs for the T-X requirements, and the Raytheon / Leonardo team, who are proposing a mature aircraft design for the competition.

The T-50A features a blended wing-fuselage with horizontal and vertical stabilisers. It is purpose-built to meet the training requirements of fifth-generation fighters such as F-22 Raptor and F-35 Lightning II. The under-fuselage incorporates a retractable tricycle-type landing gear.

The T-50A is designed to offer fighter-like performance and characteristics to eliminate pilot training gaps between the current trainer fleet and fifth-generation fighters.

The T-50A trainer integrates a modern, full-glass cockpit housing an instructor and a student in tandem seating layout. Each seat can accommodate personnel weighing between 53kg and 99kg.

“The T-50A is designed to offer fighter-like performance and characteristics to eliminate pilot training gaps between the current trainer fleet and fifth-generation fighters.”

The T-50A is an easy-to-fly aircraft such as the F-16, F-22 and F-35 fighters. Its resemblance with other fifth-generation aircraft eliminates negative training and unneeded operational flights, resulting in faster and more cost-effective training missions that enable student pilots to concentrate on their aviation skills.

The ground-based training system (GBTS) comprises a range of innovative technologies to provide options for transferring aircraft training tasks into the simulation. The system implements cutting-edge technologies based on the lessons learned from decades of training with evolving technologies.