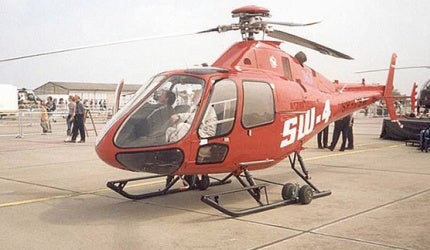 SW-4 Puszczyk is a multi-role utility helicopter developed by PZL-Świdnik, an AgustaWestland company, for the Polish Air Force. The helicopter can be used in basic and advanced pilot training, passenger transport, and surveillance and patrol missions.

SW-4 completed its maiden flight in October 1996 and its prototype was displayed at Paris Airshow in 1997. The helicopter received the EASA type certificate in September 2007. PZL-Świdnik demonstrated the prototype of the SW-4 Solo unmanned rotorcraft at the MSPO 2012 International Defence Industry Exhibition held in September 2012.

SW-4 Solo is a rotorcraft unmanned air system / optionally piloted helicopter (RUAS/OPH) variant of the SW-4 helicopter. The SW-4 RUAS prototype is expected to complete its first unmanned flight in 2013.

In May 2002, the Polish Air Force announced the procurement of 47 SW-4 helicopters for delivery by 2010.

The Polish Air Force received a total of 24 SW-4 Puszczyk helicopters by March 2010. The helicopters are being used for pilot training conducted at the Air Force College 1st Aviation Training Centre in Deblin.

The L-29 Delfin is a single-engine military trainer aircraft designed and built by Aero Vodochody for the Czechoslovakian Air Force and Soviet Air Force.

The large cabin of SW-4 offers a high degree of comfort and ample internal volume and superior external visibility for the occupants. It is accessed through rear sliding doors located on either side of the fuselage.

The modular design of SW-4 Puszczyk allows for modifications according to the mission requirements. The passenger layout can be converted into a cargo configuration for accommodating up to 323kg in the cabin and an additional 150kg in the baggage compartment. The helicopter can be equipped with a range of mission equipment such as FLIR/TV system, external cargo sling, moving map, vibration absorbing system, bambi bucket, emergency medical system kit, wire strike protection and searchlight.

The helicopter has a length of 10.58m, a width of 2.28m and a height of 3.13m. The main rotor diameter of the Puszczyk is 9m and its fuselage ground clearance is 0.57m. The helicopter can accommodate four passengers plus crew.

The cockpit can be equipped with removable co-pilot controls and systems for simulated instrument flights. The emergency simulation system allows simulation of the helicopter’s operation during the failure of the hydraulic system, attitude indicator and gyro-compass.

SW-4 Puszczyk can be fitted with external extension weapon systems. The external hard points can carry a weapons load of up to 240kg. The SW-4 of Polish Air Force is armed with a small-calibre machinegun.

SW-4 Puszczyk is powered by Rolls Royce 250 C20-R/2 turbo-shaft engine developing a take-off power of 336kW. The engine is capable of generating a continuous power of 284kW. It is equipped with fire extinguishing system. The powerplant provides a maximum speed of 206km/hr.

The helicopter can fly at a maximum altitude of 4,350m and can climb at a rate of 7.4m/s. The maximum take-off weight of the SW-4 is 1,800kg. Its 471-litre fuel tank provides a maximum range of 772km and endurance of about five hours.

The Global Military Rotorcraft Market 2011-2021This project forms part of our recent analysis and forecasts of the global military rotorcraft market available from our business information platform Strategic Defence Intelligence. For more information click here or contact us: EMEA: +44 20 7936 6783; Americas: +1 415 439 4914; Asia Pacific: +61 2 9947 9709 or via email.