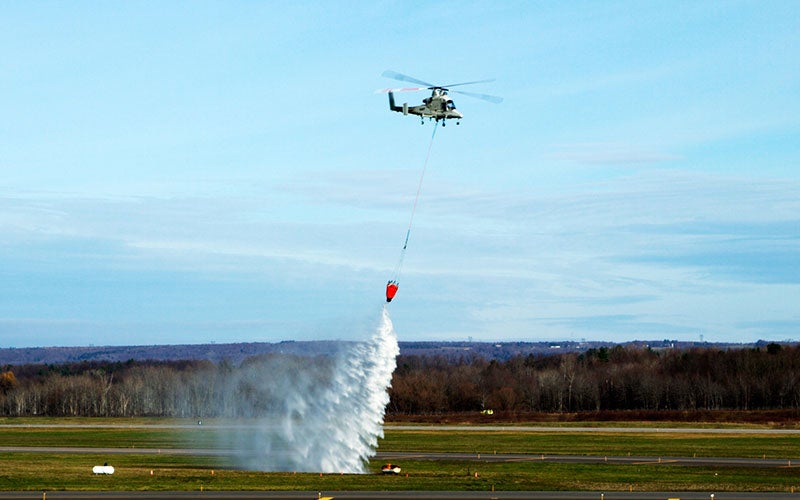 The Stalker XE is intended to provide intelligence, surveillance and reconnaissance data for warfighters. It can also be used for border patrol and other special operations. The basic Stalker UAS has been in service with the US Special Operations Command (USSOC) since 2006.

During the demonstration, which took place in Rome, New York, US, in November 2015, Stalker XE provided geolocation and data to the Kaman K-MAX unmanned cargo helicopter deployed in a fire-fighting operation.

The UAS was exhibited during the AUSA 2015 (Annual Meeting and Exposition) held in Washington D.C., US, in October 2015.

“The Stalker XE is intended to provide intelligence, surveillance and reconnaissance data for warfighters.”

The unmanned aircraft has fixed-wing assembly, with two main wings fitted to the upper part of the fuselage and a T-tail empennage.

It has a wing span of 12ft and a maximum take-off weight of 22lb, and can carry payloads weighing up to 2lb. The aircraft can be launched by a bungee cord ground launching system and land on its skid, and is operated and controlled by up to two operators.

The UAV is equipped with a modular dual electro-optical, infrared, low-light imaging camera under the fuselage to provide persistent surveillance and high-definition imagery during day conditions as well as night conditions. The imager’s pan, tilt and zoom (PTZ) head allows coverage of a wider area.

The Stalker XE also features a laser illuminator and a droppable payload compartment.

The unmanned aircraft and its payloads are remotely monitored and controlled from a laptop-based ground control station that serves as the user interface for the operator. The imagery and data captured by the payloads are down-linked and processed at the ground station.

The fuel cell technology was developed through an innovative effort that was sponsored by Defence Advanced Research Projects Agency (DARPA) and led by Lockheed Martin and Adaptive Materials (now a part of Ultra Electronics Holdings).

The UAV is also fitted with a two-bladed propeller at the nose.

The Stalker XE can fly at a maximum speed of 45mph, operate at an altitude of 15,000ft and is inaudible beyond 400ft.

It is capable of operating under all environmental conditions. The fuel cell technology offers a flight endurance of more than eight hours, which is four times longer compared to the basic model.