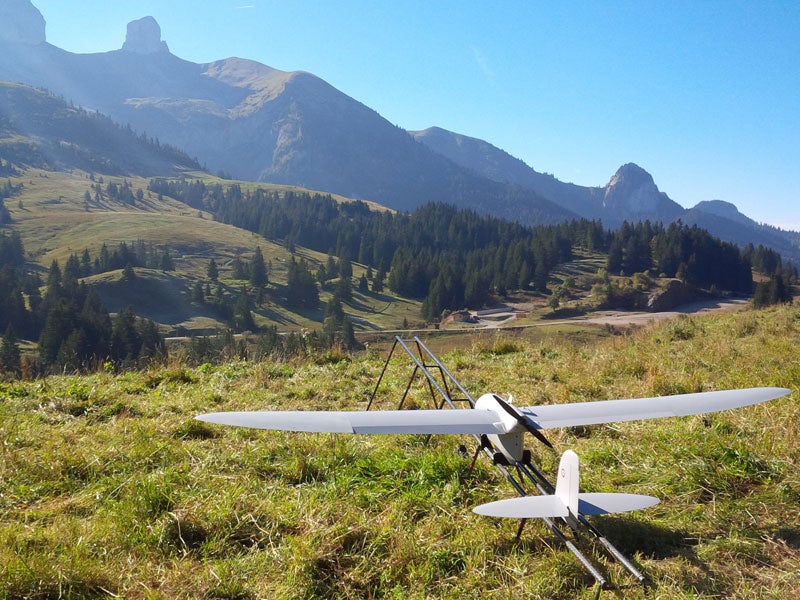 Spy’Ranger mini unmanned aerial vehicle (UAV) system is developed by Thales for use by the armed forces and special forces units in applications such as airborne image intelligence, surveillance and reconnaissance (ISR), and target acquisition.

The UAV has the ability to operate in battlefields and hostile environments at long ranges both during the day and at night.

The UAV features a fixed-wing design with lightweight, compact airframe built by French-based Aviation Design using all-composite high epoxy carbon materials. It has a wingspan of 3.9m, while its maximum take-off weight and payload capacities are 14kg and 1.2kg respectively.

It has the ability to perform repeated take-off and landings in confined areas and difficult terrain conditions. A lightweight ramp of carbon fibre sandwich construction is used for launching the UAV. A replaceable foam skid is fitted to ensure safe landing of the drone.

The UAV can be optionally provided with near-infrared laser illuminator, hand-over capability, and 3D-simulating system.

The UAV can operate in pilot-assisted and fully automated modes. In the pilot-assisted mode, the drone is controlled by a single operator using a geographical information system from the ground control station.

"The UAV has the ability to operate in battlefields and hostile environments at long ranges both during the day and at night."

The UAV executes missions autonomously from take-off to landing in the fully automated mode.

It is fitted with a high-speed encrypted tactical data link for secure transmission of high-definition imagery and video acquired by the onboard sensors to the ground control station in real time to a distance of up to 30km.

The ground control station provides the operator with the ability to operate and control multiple UAVs. It is interoperable with a man-portable multifunction camera and ground surveillance radar.

It consists of a ruggedised laptop computer, which stores sensor data and displays the UAV’s flight information in 3D maps in real time. The ground control station can interconnect to a C4I (command, control, computers, communications and intelligence) system.

Powered by a high-performance DC brushless electrical engine, the Spy’Ranger mini tactical unmanned UAV can execute missions for a period of two hours and 30 minutes. It has a range of 15km to 30km and a maximum take-off altitude of 4,500m above sea level.

Spy’Ranger can fly at a top speed of 90km/h and withstand wing speeds of approximately 19m/s.