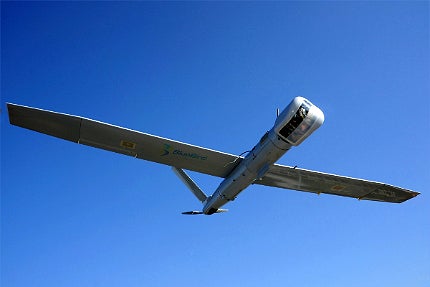 SpyLite is a multiconfiguration tactical mini unmanned aerial vehicle (UAV) produced by BlueBird Aero Systems. SpyLite is designed for Intelligence, Surveillance, Target Acquisition and Reconnaissance (ISTAR) missions. It has been operational with Israel Defense Forces (IDF) and selected by the Israeli Air Force as well.

SpyLite has been deployed in several operations and missions and accumulated thousands of flight hours in Israel and across the world. The UAV is fully automatic, from the time of catapult launch to its recovery.

SpyLite is an electrically-powered UAV system designed for covert, over-the-hill and ISTAR operations. The UAV delivers reliable performance in open areas as well as urban warfare scenarios. The compact UAV system measures 270cm from wing to wing. It weighs approximately 9kg and can carry a payload of up to 1.3kg.

"It has been operational with Israel Defense Forces (IDF) and selected by the Israeli Air Force as well."

SpyLite relays GPS-marked imagery by combining stabilised CCD and IR payloads, with advanced ground exploitation software, and provides reliable information to the user for better situational awareness. The sensor software enables the system to follow anything on the ground as designated by the operator.

The system provides users with real time video or tactical mapping of the area under surveillance. The SpyLite supports forces in real-time automatic targeting and tracking, motion detection and battle damage assessment.

The SpyLite Photogrammetric payload includes a high resolution Canon EOS-M 18MP professional camera. The gimbaled and gyrostabilised camera is controlled by autopilot. The camera can collect images while transmitting real-time video to the ground control station (GCS). The images are stored in the inbuilt removable memory.

The GCS for SpyLite is very portable and can be carried by a single operator in a bag. The GCS consists of an integrated control unit (ICU), ground data terminal (GDT) and emergency control unit (ECU).

The ICU is a rough compact control unit including control switches and personal computer (PC). The PC displays real-time video and a moving tactical map, while allowing the mission control with the help of external switches and stick. The external switches on the ICU are used in emergencies and in the event of mission termination. SpyLite can be completely controlled by the ICU without using the joystick.

The ground data terminal (GDT) can be installed on a 2m tripod. The GDT is equipped with antenna revolving mechanism. The SpyLite can also controlled by using the ECU in case of an emergency.

The remote video terminal (RVT) provides UAV telemetry and displays real time imagery received from the UAV. It enhances the situational awareness of the front line forces and eliminates the continuous communication between field commanders and GCS staff for status updates. The front line forces can carry the terminal with them, while the flight control is carried out from the GCS.

"SpyLite has been deployed in several operations and missions and accumulated thousands of flight hours in Israel."

The SpyLite UAV is a stable platform for intelligence, surveillance and reconnaissance (ISR) as it is fully automatic from the launch to recovery. It can be launched in any area, as the system is equipped with parachute and an airbag for safe recovery.

The SpyLite UAV can fly in almost any kind of weather, including strong winds of up to 75km/h (40kt) and in cloudy and rainy weathers.

The SpyLite can perform operations lasting for four hours and can be controlled over a range of 50km. The range can be extended up to 80km. The system can be modified to support enhanced mission durations just by changing the battery and wing tips.

The SpyLite UAV can reach a maximum altitude of 10,000m and stay safe from ground fire. It should, however, be operated at below 1,000m for best results. If the system runs out of battery, it takes just 15 minutes to land it, replace the battery and fly again into the air. The SpyLite can also be operated in maritime environment and can be launched from a boat.

The SpyLite system can be used for secret operations as it features low acoustic and visual signatures. It is undetectable at 500m altitude.