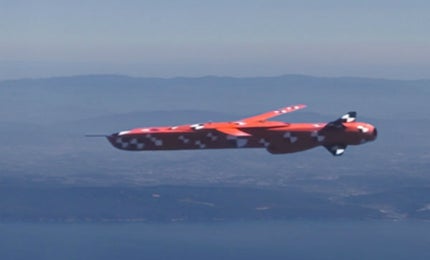 In October 2014, Roketsan and Lockheed Martin Missiles and Fire Control signed a teaming agreement on the development of a new generation stand-off cruise missile variant, SOM-J for internal carriage on the F-35 Lightning II fifth generation multi-role stealth fighter or external carriage on other aircraft.

Development of the SOM cruise missile began in 2006. The missile was unveiled at the 2nd Air Force Base located in Çiğli, İzmir in June 2011. It has been in service with the Turkish Air Force since 2012 and is certified for integration onto the F-4E 2020 and F-16 Block 40 fighter aircraft.

It was first test-fired from a McDonnell Douglas F-4E 2020 strike aircraft in August 2011.

The Undersecretariat for Defense Industries under the Ministry of National Defense placed a $25m worth contract with Kale Aero in February 2012 to develop turbojet engines for the SOM weapon system.

The SOM cruise missile features a modular design, offers high-lethality and delivers enhanced operational flexibility. It has a low detectable capability and a longer range compared to surface-to-air missiles. It is compatible with the Nato UAI standard.

The missile is capable of performing in-flight re-targeting as well as in-flight mission selection among pre-planned missions. Its rear section is fitted with control fins for providing lifting and improved manoeuvrability.

SOM is equipped with an imaging infrared (IIR) seeker and an inertial measurement unit (IMU) for high-precision guidance. The IIR seeker incorporates a high-resolution imaging system and allows detection of predefined targets with long ranges, high-agility, and resistance to electronic countermeasures / clutter.

Propulsion and performance of SOM missile

The Stand-Off missile is powered by a turbojet engine and has a range of more than 180km. It is operable under all weather conditions, and also in hostile environments.

Details of the SOM-J variant

The advanced SOM-J variant will be jointly developed, produced, marketed, and sold by Lockheed Martin and Roketsan. The first stage of SOM-J is scheduled for completion in 2018.

The variant is intended to provide exceptional anti-surface warfare capabilities to the F-35 Lightning II Joint Strike Fighter and other similar aircraft.