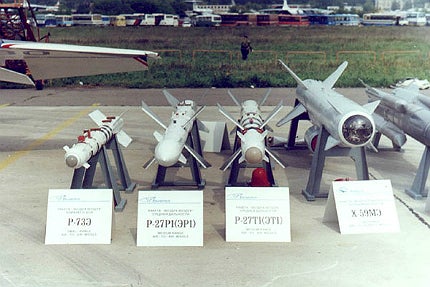 The R-27 (AA-10 Alamo) is a guided medium range, air-to-air missile manufactured by Russian firm Vympel and Ukrainian firm Artem. The missile was deployed in the 1990s on fourth generation fighters of the Russian Air Force.

The design of R-27 was initiated in April 1962, while the actual production began in 1986. The missile is currently in service with more than 25 countries across the globe.

The missile is designed to strike all types of aircraft, rotorcraft, cruise missiles and unmanned aircraft systems. It can engage air borne targets in any weather conditions during day and night.

The Indian Ministry of Defence (MoD) awarded a $250m contract for R-27 missiles in March 2012. The first batch of missiles was delivered to the Indian Air Force (IAF) in August 2013.

"The R-27 missile is intended for integration on Russian fourth generation fighters such as the MiG-29."

All versions of the R-27 missile are equipped with the same 39kg Rod warhead initiated by radar-proximity and impact fuses.

The guidance method of the missile can be converted from semi-active radarhoming to infrared by substituting the seeker module. The propulsion system includes a solid-propellant rocket motor.

"The missile is currently in service with more than 25 countries across the globe."

The R-27R1 missile is designed to destroy air targets in adverse weather conditions at any time of day. The missile has a length of 4m, body diameter of 0.23m and wing span of 0.77m. The weight of the missile is 253kg. The R-27R1 can be launched from an altitude of 25km, up to a range of 60km. The guidance system of the missile includes semi-active radar seeker with command updates.

The R-27RE1 missile is an extended range version of R-27R1. It has a length of 4.7m, wing span of 0.8m and body diameter of 0.23m. The missile has a weight of 350kg. The R-27ER1 can be launched from an altitude of 27km. It has a range of 95km. The guidance system of the missile includes semi-active radar seeker with command updates.

The R-27Т1 missile variant is designed to strike air targets at all angles during day and night. The variant uses fire-and-forget system for better control over the flight of the missile. The missile has a length of 3.7m and diameter of 0.23m. The missile has a launch weight of 245kg. It can be launched from an altitude of 24km and has a range of 50km. The missile uses infrared (IR) seeker guidance system.

The R-27ET1 is an extended range version of R-27T1. The extended range version has an overall length of 4.5m and diameter of .23m. It can carry 39kg war head to a maximum range of 90km. It has a launch weight of 343kg and maximum launch altitude of 30km. The missile is equipped with IR seeker guidance system.

The R-27P1 and R-27EP1 are fire-and-forget missiles employing passive radar homing heads. The air-launched missiles can strike radio-emitting air targets during day and night, in all weather conditions. The R-27P1 has a range of 72km, while the R-27EP1 can engage targets within the range of 110km.

MiG-29SMT is an improved version of the MiG-29 Fulcrum fighter aircraft, designed and produced by Russian Aircraft Corporation MiG (RAC…

Boeing RC-135 is a four engine, medium weight reconnaissance aircraft designed and manufactured by Boeing Defence and Integrated Systems for…

The Su-47 fighter aircraft, previously called the S-37 Berkut or Golden Eagle, was developed by the Sukhoi Design Bureau of…

Gulfstream G280 is a super midsized business jet, which was configured as a command and control (C2) aircraft for the…

19 Oct 2020
Registration is disabled.
We use cookies to ensure that we give you the best experience on our website. If you continue to use this site we will assume that you are happy with it.Ok