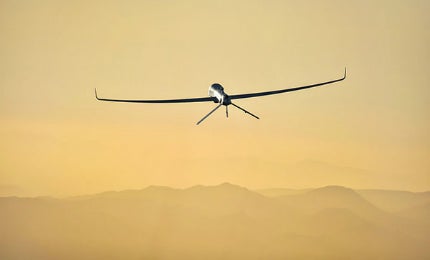 Predator® XP is an advanced version of the MQ-1 Predator remotely-piloted aircraft (RPA) being produced by General Atomics Aeronautical Systems (GA-ASI) to provide air forces with increased surveillance capabilities. The first Predator XP production aircraft is scheduled for delivery in 2016.

The aircraft is intended to perform search and rescue, over-the-horizon operations, and medium-altitude intelligence, surveillance and reconnaissance (ISR) missions over land and sea. Its advanced features include automated take-off and landing capability, improved avionics, and redundant flight controls.

The US Government issued GA-ASI a license for sale of the new Predator XP RPA to a broader customer base, including regions in the Middle East, South America and North Africa.

The Diamond DA42 Centaur Optionally Piloted Aircraft (OPA) was designed and manufactured by Aurora Flight Sciences, and is intended for military.

GA-ASI is also in discussions with Tawazun Economic Council and other companies based in Abu Dhabi on the formation of a joint venture (JV) for providing long-term service and support for Predator XP RPA in the country.

A production representation of the Predator XP aircraft made first endurance flight at GA-ASI’s Castle Dome Flight Operations Facility in February 2015. It was flown for more than 40 hours at an altitude of 10,000ft during the flight.

Design and features of the remotely-piloted aircraft system

The aircraft features upturned winglets, providing increased performance by reducing drag. It is 8m-long and measures 17m in wing span. It can carry multiple payloads weighing up to 147kg.

"Predator® XP is intended to perform search and rescue, over-the-horizon operations, and medium-altitude intelligence, surveillance and reconnaissance (ISR) missions over land and sea."

The GMTI mode facilitates quick location of moving vehicles, while the SAR mode allows acquisition of high-resolution imagery over a wide area under difficult weather conditions during day and night operations. The MWAS mode supports a variety of maritime missions including long-range and coastal surveillance, search and rescue, drug interdiction, and small target detection.

The remotely-piloted aircraft’s power plant consists of heavily modified four-cylinder, four-stroke, liquid / air-cooled Rotax 914 turbo-charged engine, with a capacity of 115hp. It has a maximum gross take-off weight of 1,157kg and a fuel capacity of 270kg.

The Predator XP RPA has a maximum air speed of 120kts and can fly to a maximum altitude of 25,000ft. It can remain airborne for up to 35 hours when flying at a height of 10,000ft above mean sea level.