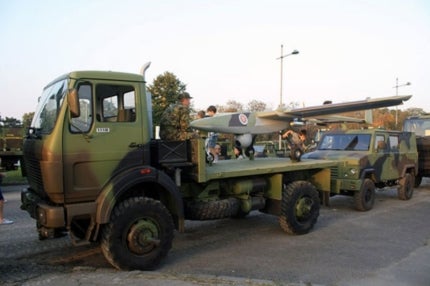 Military applications of the Pegaz include tactical reconnaissance, surveillance, target acquisition and designation. The UAV can also be used for civil missions such as borders and road surface monitoring, disaster management, and police operations.

Development of the Pegaz UAV commenced in late 2010. A prototype of Pegaz, designated as Pegaz-011, was unveiled at the Partner 2011 International Fair of Armament and Military Equipment defence exhibition held in June 2011 in Belgrade, Serbia. The Pegaz-011, built by BB Composite, made its first flight in October 2011.

The drone also took part in Partner 2015 exhibition, as well as in DSEI 2015 Defence and Security Equipment International exhibition held in London, UK.

"(The UAV) can be optionally launched with a catapult and recovered by a parachute to ensure safe landing in emergency situations."

The Pegaz UAV is made from carbon-fibre and glass-fibre composite materials. It is equipped with two main wings and features twin-boom tail assembly. It has a tri-cycle landing gear with two single-wheeled main gears installed under the fuselage, and a single-wheeled nose gear.

The UAV can be launched and recovered autonomously from prepared runways using an automatic take-off and landing system. It can be optionally launched with a catapult and recovered by a parachute to ensure safe landing in emergency situations.

The Pegaz unmanned aerial vehicle can carry a variety of surveillance and reconnaissance equipment in a payload pod located under the fuselage at the centre of gravity. The day and thermal-infrared imaging cameras are fitted to collect imagery, telemetry data and video both during the day and at night.

Pegaz can be controlled manually by the operator using a ground control station (GCS), installed with three workstations. The real-time video and aerial imagery acquired by the payloads are transmitted to the GCS through a data link.

"The unmanned aerial vehicle has a cruising speed between 130km/h and 150km/h and can reach a maximum flight speed of 200km/h."

The Pegaz UAV is powered by Zanzottera Technologies 498H two-stroke boxer-type engine, mounted in the rear of the fuselage. The engine has a bore size of 75mm and a stroke of 56mm, and is equipped with two cylinders made from light alloy metal ceramic-plated castings.

The engine generates an output power of 44hp at a speed of 6,500rpm, and drives two-blade wooden propellers mounted in a pusher configuration.

The unmanned aerial vehicle has a cruising speed between 130km/h and 150km/h and can reach a maximum flight speed of 200km/h. Its operational altitude and service ceilings are 3,000m and 4,500m respectively. The UAV has an operating range of 100km and can endure for more than 12 hours.

ShadowAir
ShadowAir LTD, based in Boulder, Colorado, US, is a provider...