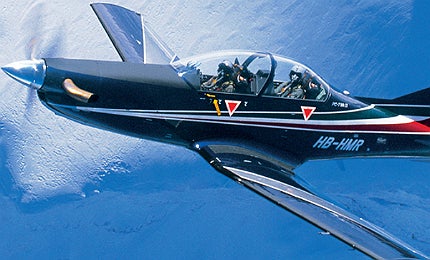 The PC-7 MkII is a turboprop trainer aircraft produced by Pilatus Aircraft. The aircraft is intended for ab initio (from the beginning) training and basic flight training of rookie pilots. It delivers reliable and cost-effective training solutions to the air forces of the world.

The aircraft is in service with the South African Air Force (SAAF), Indian Air Force (IAF), Botswana Defence Force (BDF), Royal Malaysian Air Force and the Royal Brunei Air Force. More than 160 PC-7 MkII trainer aircraft have been sold since its introduction in 1994.

"More than 160 PC-7 MkII trainer aircraft have been sold since its introduction in 1994."

The PC-7 MkII is based on the PC-9M advanced trainer. It uses the airframe and avionics of the PC-9M. The modular design of PC-7 MkII allows integration of systems with minor modifications. The conventional systems used in the aircraft ensure easy operation and maintenance. The aircraft has a length of 10.8m, wing span of 10.19m and a height of 3.26m. The wing area of the PC-7 MkII is 16.28m². The basic empty weight of the aircraft is 1,710kg, while the maximum take-off weight is 2,250kg.

The PC-7 MkII is equipped with stepped tandem glass cockpit accommodating two crew members on ejection seats. The glass canopy offers unobstructed visibility for both cockpits. The ergonomically placed instruments, displays and controls ease the operation of the aircraft in all stages of flight. The tandem layout also allows the instructor to monitor, aid, or override the actions of student pilots.

The PC-7 MkII is powered by a Pratt & Whitney PT6A-25C turboprop engine driving a Hartzell four-bladed aluminium propeller. The engine develops a maximum power of 700shp and offers lower operating cost over the PT6A-25A engine of the PC-7 aircraft. It is also equipped with digital electronic engine control system.

The SAAF became the first customer for the PC-7 MkII when it placed an order for 60 aircraft in 1993. Deliveries were concluded with the handover of final aircraft in 2006. The PC-7 MkII aircraft in SAAF service were designated as Pilatus Astra, due to their indigenously built avionics suite.

"The SAAF became the first customer for the PC-7 MkII when it placed an order for 60 aircraft in 1993."

The Botswana Defence Force placed an order for five PC-7 MkII trainer aircraft in April 2011 to replace its PC-7 fleet. The aircraft were formally inducted into service by the BDF in a ceremony held in February 2013.

In May 2012, Pilatus Aircraft was awarded a $523m contract by the Indian Air Force to deliver 75 PC-7 MkII turboprop aircraft. The contract also includes an option for additional aircraft plus integrated ground based training system and a logistics support package. The IAF received the first batch of PC-7 MkII trainers in February 2013.

L-70 Vinka is a military basic trainer aircraft designed and developed by Valmet for the Finnish Air Force (FAF).

Pilatus Aircraft Limited rolled out the PC-21 training aircraft in May 2002.