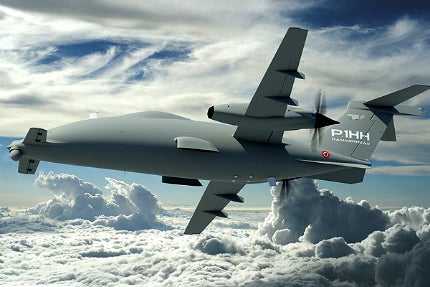 The P.1HH HammerHead UAS made its first flight in February 2013, from an Italian Air Force base. The UAS was first announced at International Defence Exhibition and Conference (IDEX) held in Abu Dhabi, UAE. The UAS was unveiled in June 2013 at the Paris Air Show.

The UAS is designed primarily to perform intelligence, surveillance and reconnaissance (ISR) operations. It is also capable of performing several other missions by using a combination of payloads.

The mission management system (MMS) installed aboard the P.1HH HammerHead helps it to perform patrol and ISR missions for preventing terrorist activities.

"The P.1HH HammerHead UAS made its first flight in February 2013, from an Italian Air Force base."

The P.1HH HammerHead is designed to comply with STANAG USAR 4671 standards. The UAS integrates a large fuselage housing several combinations of payloads.

The aircraft is designed with three lifting surfaces configuration (3 LSC) and high aspect ratio laminar wings, along with increased wing span, to make it more flexible and carry greater weight.

The P.1HH is installed with a large fuselage tank for long range endurance. The fuel tank is specially designed to provide better stability and operational flexibility to the UAS.

The aircraft is installed with several instruments controlled by vehicle control management system (VCMS) for better control and flexibility during missions. The aircraft has provision for hot air on main wing for stopping ice formation, a new electrical forward wing and a fire extinguishing for the engine nacelle area. It is equipped with a hydraulic dual pressure system for landing gear operations and brake system.

The advanced VCMS in combination with the advanced mission management system (MMS) controls the aircraft and other mission specific equipments.

"The HammerHead UAS was derived from the P.180 Avanti II commercial aircraft."

Engine on the Italian MALE UAS

The flight control computer (FCC) of the P.1HH HammerHead controls the engine interface units regulating the entire power plant of the aircraft.

The FCC provides commands by utilising data from the engine and propeller to drive the turbine and the propeller governors.

The GCS of HammerHead is placed in an independent shelter which can accommodate flight control crew, payloads and other related equipment to control up to three unmanned aircraft systems.

The AW129 multirole combat helicopter is the latest variant of the A129 Mangusta (Mongoose) helicopter in service with the Italian Army.

The M-345 is a basic-advanced, lightweight trainer jet developed by Alenia Aermacchi for the basic-advanced stage of pilot training.