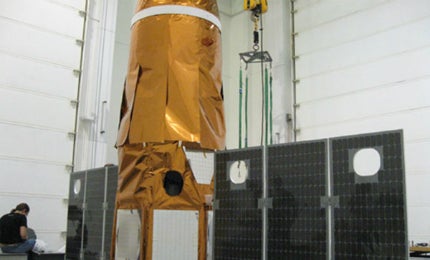 The Italian military satellite was unveiled at the Paris Air Show in June 2007. It is scheduled for launch by Arianespace’s Vega launcher from the Guiana Space Center in early 2016. It will be placed in a sun-synchronous orbit at an altitude of 600km. It will have a mission life of more than six years.

OPTSAT 3000 is the follow on programme to the lightweight, high-agile Ofeq observation satellites series, which is also built by IAI / MBT Space Division.

Paz is a new military earth radar observation satellite, designed and built by Airbus Defence and Space to meet security and defence requirements of the Spanish Government. The satellite is owned and operated by Hisdesat.

Telespazio awarded a $182m subcontract to IAI / MBT Space Division in July 2012 for the construction of the OPTSAT 3000 satellite.

Elbit Systems Electro-Optics Elop was awarded a contract worth $40m by IAI in December 2012, to provide the Jupiter advanced space camera and additional services.

Italian firm Compagnia Generale per lo Spazio (CGS) was selected to provide engineering and launch services for the OPTSAT 3000 satellite programme, in January 2014. The company is also responsible to design and manufacture the satellite to launcher interface adapter.

Arianespace was awarded a contract by CGS in February 2014 for the launch of the OPTSAT 3000 satellite aboard Vega launcher.

Design and features of OPT

OPTSAT 3000 is equipped with two deployable fixed solar arrays and batteries for power generation. It will have a weight of approximately 400kg at launch.

"The satellite will be placed in a sun-synchronous orbit at an altitude of 600km and will have a mission life of more than six years."

The panchromatic / multi-spectral JUPITER remote sensing camera system is designed to capture high-resolution, detailed imagery and an accurate mapping of the Earth. It has large field of view and can also create high-quality optical pan-sharpened images.

An on-board recorder stores the images captured by the cameras. The imagery can be transmitted to the ground segment in real time. The satellite is also integrated with a star tracker and a downlink antenna.

The OPTSAT 3000 Earth observation satellite can be tracked and operated by a single ground control station. The ground segment receives and processes the optical imagery and satellite information, and sends commands to the satellite to ensure efficient operation.