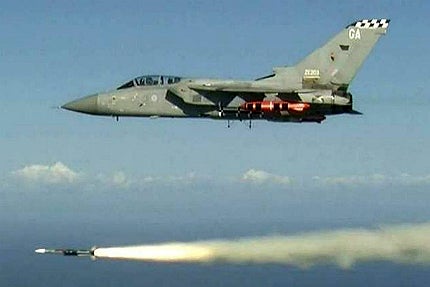 Meteor is a next generation, active radar-guided, beyond visual range air-to-air missile (BVRAAM) system. The missile is being developed by MBDA Systems for six European nations.

Beyond Visual Range Air-to-Air Missile Integrated Project Team (BVRAAM IPT) was set up by the UK MoD to manage the development of the Meteor missile. The project was later joined by Germany, Italy, Spain, France and Sweden, to fulfil their future BVRAAM requirements.

“The Meteor BVRAAM can be integrated on Eurofighter Typhoon, Saab Gripen and Dassault Rafale aircraft.”

The UK Ministry of Defence (MoD) awarded a contract to MBDA for the design and development of Meteor missile in December 2002. The contract was signed on behalf of all partner nations of the Meteor programme. It includes options to produce the missile to meet individual requirements of nations.

The preliminary design review and wingless specification of the Meteor were approved in 2003. The provisional integration of Meteor representation on Eurofighter Typhoon was successfully completed in the same year.

The trial integration of Meteor on Gripen and Rafale aircraft was carried out in 2004. The design of the missile was confirmed with the second round of aerodynamic wind tunnel trials in the same year.

The Meteor missile handling abilities of Rafale aircraft were confirmed during live catapult take-off and landing trials aboard the aircraft carrier Charles de Gaulle in 2005.

The maiden test firings of Meteor from Gripen aircraft were conducted in 2006 at the Vidsel range in Sweden.

“A series of air and ground trials and missile development trials were successfully concluded by 2012.”

In September 2010, Saab was awarded a $47.76m contract by the Swedish Defence Materiel Administration (FMV) for the integration of Meteor on Gripen aircraft. The contract includes test flights and firings of Meteor.

A series of air and ground trials and missile development trials were successfully concluded by 2012.

MBDA and Thales signed a $60.51m contract for the development and initial production of seekers for the Meteor missiles in June 2013. BAE Systems was contracted for the integration of Meteor on Typhoon aircraft in the same month.

Saab and FMV successfully conducted the first test firing of the Meteor missile, which is configured for mass production, from Gripen aircraft in June 2013.

Design of the Meteor missile system

The missile, being designed as a complete unit, requires no assembly and maintenance immediately before loading. This arrangement reduces its overall life logistic support cost.

Meteor can be launched as a stealth missile. It is equipped with enhanced kinematics features. It is capable of striking different types of targets simultaneously in almost any weather.

The Meteor has a length of 3.65m and diameter of 0.178m. It is designed to be compatible with AIM-120 type rail and eject launcher systems.

The Meteor missile is equipped with a blast-fragmentation warhead, supplied by TDW of Germany. The warhead is designed as a structural component of the missile. The missile integrates proximity and impact fuses.

Sensors on the beyond visual range air-to-air missile

The Meteor is equipped with a two way datalink, which allows the launch platform to provide updates on targets or re-targeting when the missile is in flight. The datalink is capable of transmitting information such as kinematic status. It also notifies target acquisition by the seeker.

Propulsion system on the next generation missile

The Meteor missile is powered by a solid fuel variable flow ducted rocket (ramjet) supplied by Bayern-Chemie. The ramjet provides the Meteor missile with a capability to maintain consistent high speeds. This ability helps the missile to chase and destroy fast moving flexible targets.

The Meteor includes an electronics and propulsion control unit (EPCU). The EPCU adjusts the rocket’s air intake and duct covers based on the cruise speed and the target’s altitude.

The EPCU observes the distance and fuel level in the rocket and adjusts the throttle of the rocket. This feature of the EPCU helps the missile to manage its fuel system.

US to proceed with proposed F-35 aircraft sale to UAE

06 Apr 2021
Registration is disabled.
We use cookies to ensure that we give you the best experience on our website. If you continue to use this site we will assume that you are happy with it.Ok