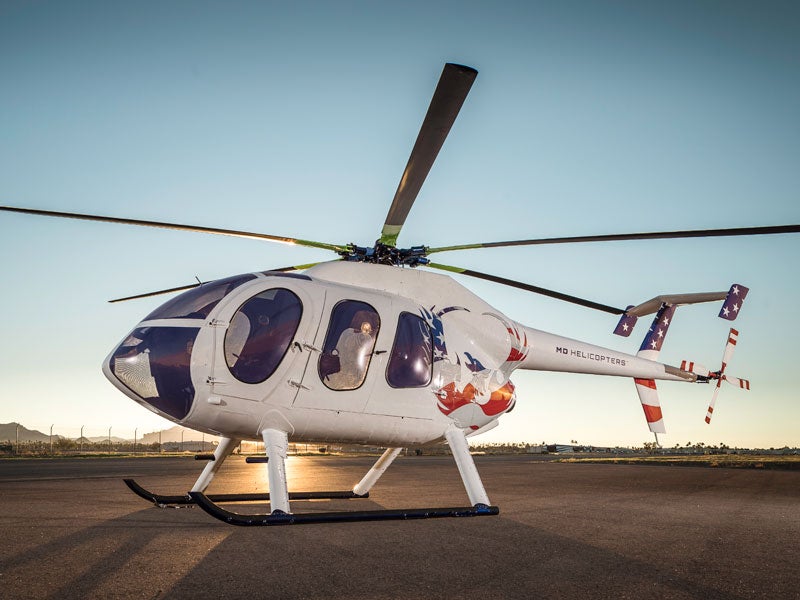 The MD 6XX is a next-generation, multi-mission, single-engine helicopter currently being developed by MD Helicopters. The aircraft can be used for military, law enforcement, emergency medical service (EMS) and special operations missions.

The first MD 6XX prototype was displayed for the first time at the 2017 HAI Heli-Expo Trade Show and Exhibition held in March.

The extended composite tail-boom integrates a redesigned tail assembly fitted with a four-bladed tail rotor. The tail rotor is capable of delivering 40% more anti-torque, when compared to no tail rotor (NOTAR).

The full-rate production helicopter will feature crash-resistant stroking crew seats, a high-visibility sliding door, and an integrated weapons plank for carrying a rage of weapon systems. The rotorcraft will also have the capability to launch and recover unmanned aerial vehicles (UAVs).

Cockpit and avionics of the multi-mission helicopter

The advanced glass cockpit of MD 6XX can accommodate two crew members. It incorporates IDU-680 integrated electronic flight instrument system (EFIS) from Genesys Aerosystems. The EIFS includes three IDU-680 6in x 9in high-resolution LCD displays, which are field-upgradeable to add new functionality without the need for replacement of hardware components.

The Macro-Blue high-definition tactical displays aboard the cockpit are designed to comply with the DO-160 environmental and military standards for contrast, sunlight readability, anti-reflective glass and night vision imaging system (NVIS) radiance.

The cabin of MD 6XX can be installed with crashworthy seating to carry six passengers. The helicopter can carry a maximum useful load of 1,450kg (3,200lb) including a jettisonable load of 227kg (500lb). The cabin can be configured for different roles according to the mission requirements.

The prototype on display at HAI Heli-Expo is installed with the EASA certified EMS interior from Air Ambulance Technology. The versatile modular design allows the operators to fully configure the interiors according to their needs.

The single-patient transport configuration is compatible with both right and left-hand command operations.