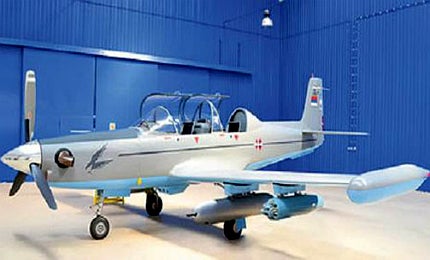 KOBAC (Sparrowhawk) is a new light military trainer aircraft being developed by UTVA. It is a light attack / counter-insurgency (COIN) variant of the LASTA trainer aircraft. The KOBAC aircraft is primarily developed for advanced training in all weather conditions and equipped with the capability to conduct border patrols and strikes against ground-based targets.

The aircraft will be used for the basic training, advanced school-combat training, aerobatics, instrument and tactical flying. The KOBAC aircraft will also be deployed in close air support, counter insurgency and reconnaissance missions.

The KOBAC concept was demonstrated for the first time to the senior military officials in April 2012. A prototype of the aircraft was unveiled to the public in September 2012 during the Batajnica 2012 Air Show, marking the 100 years of Serbian military aviation.

The maiden flight of the first prototype is scheduled for 2013.

"The KOBAC concept was demonstrated for the first time to the senior military officials in April 2012."

KOBAC was designed by UTVA in cooperation with the Military Technical Institute and Yugoimport-SDPR. It is a low-wing tandem-seat aircraft incorporating a metal airframe. Based on the LASTA airframe, the aircraft integrates numerous modifications to support its new missions. Notable modifications include the stretched nose, strengthened wing, turboprop engine and a four-bladed propeller.

The aircraft integrates more undercarriage lines and wing-tip fuel tanks. The empty weight of the KOBAC is 1,330kg. The more powerful engine provides a maximum take-off weight of 1,700kg.

The cockpit accommodates two crew members in a tandem configuration. The cockpit is enclosed with a new canopy offering better visibility than the LASTA-95.

It was ergonomically redesigned to be more human compatible. The rear seat is raised to offer better front visibility to the back-seater. The seating positions are provided with Martin-Baker Mk 15B lightweight ejection seats.

The modern three-screen cockpit is equipped with primary and multifunction displays showing the tactical information and sensor imagery. The primary flight controls of the aircraft are HOTAS (hands on throttle and stick). The aircraft is also equipped with an attack navigation system.

The attack navigation system (ANS) of KOBAC allows the mission planning, engagement and evaluation of completed tasks. The system ensures the precision engagement of targets by onboard guided and non-guided weapon systems.

The ANS suite consists of a display unit, Inertial Navigation System (INS), GPS unit and an optoelectronic system integrating a day / night thermal image camera and a laser range finder (LRF). The sensors are mounted in a low-profile assembly under the centre fuselage.

Weapon systems of the light aircraft

KOBAC can be armed with a range of weapon systems for combat missions. The aircraft is equipped with five hard-points for accommodating more than 1,100lb of payload. The four under-wing pylons can hold a variety of ordnance including bombs, unguided rocket launchers and gun pods mounting 12.7mm/20mm calibre machine guns or cannons.

The outer wing pylons can carry air-to-air or air-to-surface missiles. The hard-point under centre fuselage houses an electronic warfare pod.

The KOBAC aircraft is believed to be fitted with Pratt & Whitney Canada PT6A turboprop engine driving a four-bladed propeller. The engine generates a power output of up to 1,000hp.

"KOBAC can be armed with a range of weapon systems for combat missions."

The aircraft will be equipped with retractable tricycle landing gear allowing the operations from concrete runways and prepared gross terrains.

LASTA-95 is an advanced trainer aircraft manufactured by UTVA.

J-22 Orao is a single-seat, dual engined, ground attack and tactical reconnaissance aircraft designed and manufactured by the Soko Aircraft Factory of Bosnia and Herzegovina.