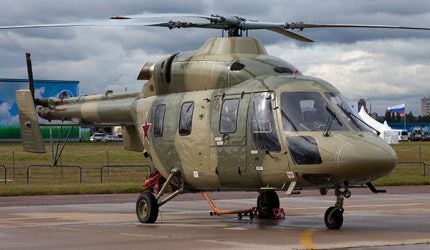 Ansat-U, a trainer variant of the Ansat helicopter, is being produced by Kazan Helicopters for the Russian Air Force. The helicopter can be used for the training of cadets from military/civil aviation schools and for the retraining of pilots.

Kazan was selected to supply Ansat-U training helicopters to the Russian armed forces in September 2001. The assembly of the first Ansat-U prototype was completed in April 2004. Following the completion of tests, the full scale production of Ansat-U was authorised in December 2008.

The Ansat-U helicopter is a trainer modification of the Ansat helicopter. It incorporates redundant flight control systems and twin gas-turbine engines to deliver the high degree of safety required for training missions. The aircraft is equipped with a dual-control system and seating arrangement for six students.

The Ka-27 and Ka-28 are naval anti-submarine helicopters and the Ka-29 is a naval combat and transport helicopter, designed and manufactured by the Kamov Design Bureau in Russia.

The transport variant of Ansat can carry up to ten passengers and 1,000kg of internal payload as well as 1,200kg of external cargo under-slung. It possesses the most spacious cabin (6.7m³) in its category.

The Ansat SAR version is intended for search and rescue, the evacuation of casualties, and the transportation of special service personnel and their equipment. The variant features two stretchers for casualties, two seats for medical personnel, and a hatch for the loading of stretchers.

The Ansat Ambulance variant is equipped with medical equipment, two stretchers, one seat for casualties and two seats for medical personnel. The VIP variant features sophisticated seating and other amenities for two VIPs and two attending personnel.

Kazan Ansat-2RC is an attack helicopter variant armed with a 12.7mm machine gun and four hardpoints on two stub wings. The hardpoints can hold rocket launchers, bombs and anti-aircraft missiles.

The Ansat-U is crewed by one pilot. The cockpit is equipped with KSU-A digital fly-by-wire control system. The four-channel digital integrated system is capable of controlling the helicopter in all flight stages. The system allows the pilot to simulate engine shut off-mode without halting the engines.

The helicopter can also be configured to provide various levels of control difficulty for pilot training.

The Ansat-U helicopter is powered by two PW207K turboshaft engines driving a four-blade main rotor and two-blade tail rotor. Each engine produces a continuous power of 561shp and maximum power of 630shp. The helicopter is equipped with an electronic engine management system. It ensures the pilots to practice various scenarios of engine failures.

The Ansat-U can fly at a maximum altitude of 5,700m. The maximum hover ceiling (out of ground effect) is 3,300m. The maximum rate of climb of the helicopter is 21.5m/sec. The maximum payload carrying capacity is 1,300kg.

The helicopter has a cruise speed of 250km/h and maximum range of 635km. The Velocity Never Exceed (VNE) speed is 285km/h.