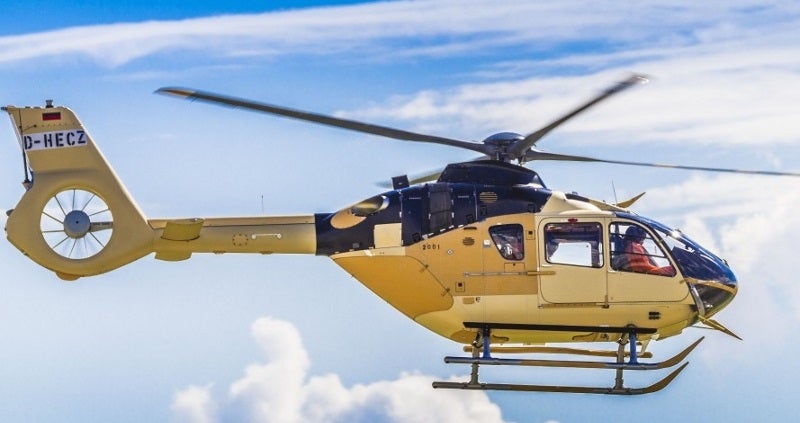 The H135 military training helicopter is manufactured by Airbus Helicopters to meet the flight training needs of armed forces across the world. The highly versatile platform is suitable for basic, advanced and mission training.

Airbus Helicopters received a 17-year contract worth £500m ($730m) from Ascent Flight Training in May 2016 to deliver 29 H135s and three hoist-equipped H145s to the UK Ministry of Defence (MoD), under the UK Military Flying Training System (UKMFTS) programme. Ascent is the UK MoD’s training service partner for the UKMFTS.

The production ramp up and the maiden flight of the first H135 for UKMFTS were concluded in June 2016. Deliveries were initially scheduled to start in 2017. However, the first aircraft was delivered ahead of schedule to UKMFTS in December 2016, while deliveries of other aircraft were completed in October 2018.

Airbus secured a contract from the Brazilian Navy in February 2019 for the delivery of three H135 military training helicopters.

“Deliveries are scheduled to start in 2017 and will be completed in early-2018.”

The helicopter also integrates energy-absorbing seats and crash-resistant fuel cells. The under-fuselage is fitted with skid-type landing gear with skid protectors, while the unobstructed cabin and cargo compartments offer a storage volume of 5.9m³.

Cockpit and avionics of the H135

H135’s advanced glass cockpit features three large electronic displays. It accommodates two crew members side by side. The night-vision goggle (NVG) compatible cockpit also incorporates a first limit indicator, which displays the engine’s operational data based on the phase of flight for the pilot in one indicator.

The TAS system enables pilots to detect and avoid aircraft approaching the flight path of the helicopter, while the HTAWS warns the pilots about hazardous terrain and obstacles on the flight path to avoid the risk of collision.

The Helionix avionics system in combination with four-axis automatic flight control system (AFCS) minimises the workload of pilots. The highly redundant system has the capability to automatically reconfigure and restore functions in the event of subsystems failure, without the need for pilot intervention.

The helicopter is powered by either two Pratt & Whitney Canada PW206B3 or two Turbomeca Arrius 2B2 plus turbo-shaft engines. Each engine model features a full authority digital engine control (FADEC) system and over-speed protection system. Fuel is supplied from a bladder-type main fuel tank and a supply tank.

Airbus selected PW206B3 engines to power H135 helicopters that are intended for the US Navy helicopter trainer replacement programme.

The H135 has a maximum speed of 278km/h and can attain a maximum range of 609km. The maximum operating altitude of the helicopter is 20,000ft.