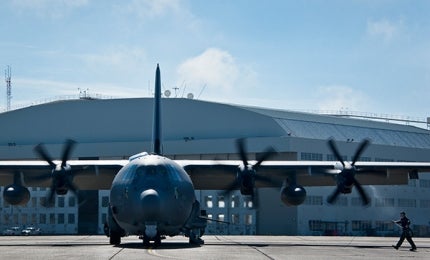 Griffin is a combat-proven, multi-platform, precision-guided missile designed and manufactured by the Raytheon Company. The missile is in service with the US Air Force (USAF) and the US Navy (USN).

Production of the Griffin missile began in 2008. The missile system can engage both static and fast-moving targets and offers reliable operational effectiveness to the warfighters against a variety of threats in counter-insurgency and irregular warfare operations.

The Griffin A is designed for integration onto the C-130 aircraft. The Griffin B can be launched from lightweight, rotary-wing scout platforms, light-attack fixed-wing aircraft, light infantry and other ground assets. It can also be integrated onto sea-based platforms to provide improved targeting performance in maritime environments.

The Griffin missile can also be integrated onto UAV platforms such as MQ-1 Predator and MQ-9 Reaper.

Orders and deliveries of Griffin missile

Raytheon delivered the 2,000th Griffin missile in Griffin Block III configuration to the US Special Operations Command (SOCOM) in February 2014.

In November 2014, Raytheon was awarded an $85.5m indefinite delivery indefinite quantity (IDIQ) contract by the USAF to deliver Griffin A and B Block II / III missiles and support services.

The Griffin missile is integrated on to the USAF’s AC-130W Stinger II gunship, the US Marine Corps’ (USMC) KC-130J Harvest Hawk aircraft and US Navy’s Cyclone-class patrol coastal platforms.

The missile has a length of 43in and a diameter of 5.5in. It weighs 14.96kg and can carry a 5.89kg warhead, which provides high lethality against various targets while reducing collateral damage.

The Griffin missile is powered by a solid-propellant rocket motor developed by Aerojet Rocketdyne. The motor offers high manoeuvrability. A control actuator system (CAS) installed in the rear section controls the missile’s movement.

In September 2011, Raytheon unveiled plans to integrate the Griffin missile on to the Hawker AT-6 light attack aircraft.

In February 2012, the US Army fired a Griffin B missile against a static target located at more than 4km away during a test conducted to protect forward operating bases and small combat outstations.

The AGM-88E AARGM is a medium-range air-to-ground missile developed by Alliant Techsystems (ATK).

The USN test-fired a Griffin B missile from a Rolling Airframe Missile (RAM) launcher against a static target in the fourth quarter of 2011 and conducted a live-fire demonstration of three Griffin B missiles against small, fast-moving boats in the first quarter of 2012. Each missile successfully engaged a speedboat located approximately 2km away from the launch location.

Raytheon demonstrated the new variant of Griffin missile, the Griffin Block III, against different static and moving targets in February 2014. The missile features a new seeker and a multi-effects warhead system.

Raytheon and the USN demonstrated maritime capabilities of the MK-60 Patrol Coastal Griffin Missile System in September 2013. Initial operational capability of the missile system was achieved in March 2014.

In July 2014, Raytheon conducted a guided flight test of SeaGriffin (also known as Griffin C), which is an enhanced version of Griffin B Block II missile. The company demonstrated the in-flight re-targeting capability of the Griffin C in October 2014.