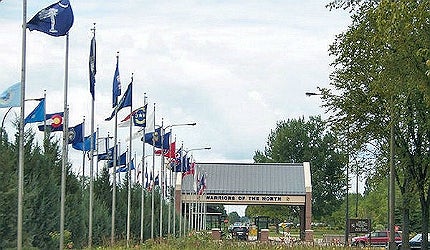 Grand Forks Air Force Base (IATA code: RDR) is situated 26km west of Grand Forks city in North Dakota, in the US. It is owned by the United States Air Force (USAF) and operated by Air Mobility Command (AMC). Approximately 6,300 military personnel reside at the base.

The first Global Hawk was deployed at the base in May 2011. The primary mission of the base will be changed to launch, recovery and maintenance of unmanned aerial vehicles in 2013.

Construction of the Grand Forks base began in September 1955 and was completed in August 1956. It was built on a 5,400 acre site as the Air Defence Command (ADC) fighter interceptor base.

The base was named after the Grand Forks city in North Dakota in December 1955. It became operational in January 1957. The control of the base was transferred from ADC to Strategic Air Command (SAC) in 1958. The base operations were shifted to AMC in 1994.

The 319th Bombardment Wing (319 BW) was activated in February 1963. The 321st Strategic Missile Wing (321 SMW) was deployed at the base as the LGM-30 Minuteman II intercontinental ballistic missile (ICBM) wing in November 1963.

Both wings were transferred to the Air Combat Command (ACC) in June 1992.

Design and construction of North Dakota’s air base

UND has built a 5,000ft² L-3 unmanned aircraft system (UAS) training centre at the base in August 2011 to carry out R&D on UAS technologies and MQ-1 and MQ-9 training.

The joint venture of SEH and Adolfson and Peterson Construction was awarded a contract by the US Army Corps of Engineers to build a 30,343ft² structural fire station at the base.

The fire station houses fire protection and response vehicles, an alarm centre, emergency vehicle access roads and a parking lot. It is made up of masonry construction with sloped standing seam metal roof.

Sentry Box was contracted to provide protective coating to the buildings at the Grand Forks air force base for five years.

Garrison and air facilities at Grand Forks air force base

"It is owned by the United States Air Force (USAF) and operated by Air Mobility Command (AMC)."

The 319 ABW, which was activated in May 1955, carries out air refuelling and airlift missions for the USAF and its allied forces by using KC-135R aircraft. It is organized into four different groups, namely the 319th Operations Group, 319th Mission Support Group, 319th Medical Group and 319th Maintenance Group.

Control tower and other facilities at IATA: RDR

A 17,876ft² air traffic control tower and a two-storey radar approach control facility were built at the base in September 2010 at a cost of $12.5m. PBS&J served as the design architect while Peter R Brown Construction managed the construction.

Bergstrom Electric carried out the electrical works at the new control tower between May 2009 and August 2010.