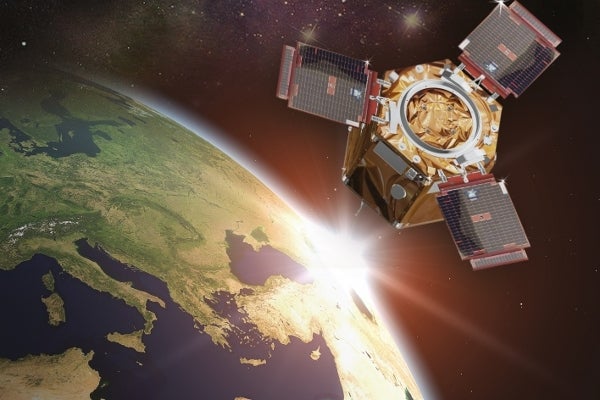 GÖKTÜRK-2 is Turkey’s first high-resolution remote sensing earth observation satellite, launched in December 2012. The satellite, being operated by the Turkish Air Forces from an Ankara fixed ground station, completed 5.344 passes during its first year in space as of December 2013.

In addition to providing high resolution images for intelligence, reconnaissance and surveillance mission needs of the Turkish armed forces, the satellite can also be deployed for civilian activities including geographical data gathering, disaster monitoring and control, and the tracking of illegal constructions.

The GÖKTÜRK-2 was designed and developed by a consortium of Turkish Aerospace Industries (TAI) and the Scientific and Technological Research Council of Turkey’s TÜBİTAK Space Technologies Research Institute (TÜBİTAK UZAY). The GÖKTÜRK-2 programme was carried out between 2007 and 2012 as part of the Earth Observation Scientific Research and Technology Satellite Development Project funded by TÜBİTAK.

The satellite was integrated and tested at TAI’s Assembly Integration and Test (AIT) facility in Ankara and transported to Jiuquan Satellite Launch Center (JSLC) in Gansu Province, China, in November 2012. The satellite launch took place on 18 December 2012, atop a Long March-2D (LM-2D) rocket.

The GÖKTÜRK-2 is placed at an inclination of 90° in the sun’s synchronous orbit. The satellite has a launch mass of approximately 409kg and operates at an altitude of 700km. It takes 98 minutes to complete one orbit around the globe. The average revisiting time of the satellite is 2.5 days.

The main payload of the satellite consists of a multi-spectral imager (MSI) equipped with EOS-C panchromatic (PAN) and EOS-C multispectral (MS) electro-optical sensors to capture high resolution images covering the entire earth. The PAN and MS cameras fitted in the satellite have resolutions as high as two and a half million and five million pixels respectively.

The GÖKTÜRK-2 is capable of transferring real time images, and can store up to 8GB of images and up to 32GB of scientific information.

The satellite can download images at a rate of 100MB/s, and capture wide area and stereo images of 100km x 34km and 100km x 20km dimensions respectively. The geo-location and the pointing accuracies of the satellite are less than 1km. The satellite can store up to 45 frames measuring 20km x 20km each.

"The remote sensing satellite can communicate with the ground station for up to 42 minutes per day."

Solar generator system of the GÖKTÜRK-2

Details of the LM-2D launch vehicle

The LM-2D is an orbital carrier rocket developed by Shanghai Academy of Spaceflight Technology (SAST). It is primarily used to launch low earth orbit (LEO) and sun-synchronous orbit (SSO) satellites.

The two-stage vehicle has an overall length of 41.05m and a fairing diameter of 3.35m. Its SSO and LEO payload capacities are 1,300kg and 3,500kg respectively.