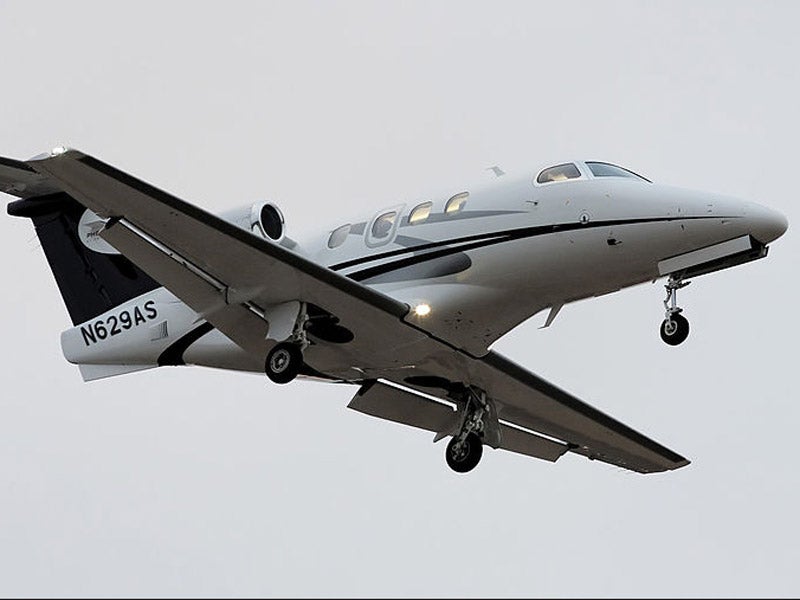 Embraer Phenom 100 business jet has been selected by the UK Ministry of Defence (MOD) to provide flight training for pilots of multi-engine aircraft of the Royal Air Force (RAF), under the fixed-wing training element of the UK Military Flight Training System (UKMFTS) programme.

Developed by Brazilian aircraft manufacturer Embraer, Phenom 100 will be configured to provide RAF students with multi-engine training in specific areas such as high-altitude operations, flying in multi-aircraft formations, asymmetric flying, crew resource management, flying with a second engine, and dealing with emergency procedures.

The Phenom multi-engine trainer aircraft will eventually replace King Air 200 twin-engine turboprop aircraft fleet in service with the RAF since 2004. When operational, the airplane will be based at RAF Cranwell station in England.

In February 2016, training design and delivery organisation Ascent received a fixed-price contract worth £1.1bn ($1.58bn) from the UK Ministry of Defence (MOD) to provide fixed-wing military flying training services for the UK Military Flight Training System (UKMFTS) programme through May 2023.

Ascent is jointly owned by Lockheed Martin and Babcock International and won a 25-year contract from the UK MOD in June 2008 to deliver aircraft, courseware, instructors, infrastructure and support services for fixed and rotary wing pilots and rear crew for the UK Armed Forces.

Lockheed Martin and Babcock will deliver the ground-based training equipment and infrastructure for the fixed-wing training aircraft.

Affinity Flying Training Services, a joint venture between Kellogg Brown and Root (KBR) and Elbit Systems UK, was selected as the preferred bidder in the Aircraft Service Provider (ASP) completion for the UKMFTS fixed-wing programme in October 2014.

The Grob G 120TP Prefect will provide elementary flying training, while the T-6C is intended to provide basic flight training. The aircraft are expected to be operational in 2019.

The Phenom 100 trainer aircraft is manned by an instructor, two student pilots and four students as rear crew. The student pilots are seated in the modern glass cockpit, while the cabin accommodates the instructor and four crew members. The cockpit and cabin windows provide enhanced visibility.

The Prodigy Flight Deck 100 fully-integrated touchscreen avionics suite is based on the Garmin G3000 platform and provides improved situational awareness, as well as enabling safe and easy operation while reducing the pilot workload.

“Embraer Phenom 100 business jet has been selected by the UK Ministry of Defence (MOD) to provide flight training for pilots of multi-engine aircraft of the Royal Air Force (RAF).”

The flight data is displayed on the primary flight displays and multi-function displays.

In April 2016, CAE was awarded a contract by Lockheed Martin to develop synthetic training equipment including four Garmin 1000 part-task trainers, a Phenom 100 flight training device (FTD) and a Phenom 100 full-flight simulator (FFS). The systems will be delivered to the RAF in 2017.

The FFS and FTD systems will have the CAE Medallion-6000 image generator and databases built to the Common Database (CDB) standard, which allows distributed, interoperable mission training.

Engine and performance of Phenom 100

The AT-802U surveillance and light-attack aircraft is a heavily armoured version of the AT-802 agricultural and fire fighting aircraft, developed…

06 Jan 2021
Registration is disabled.
We use cookies to ensure that we give you the best experience on our website. If you continue to use this site we will assume that you are happy with it.Ok