The H225M medium, twin-engine helicopter is the latest member of the Cougar helicopter family.
The new H225M is based on the Cougar Mk 2, with a new five-bladed main rotor and reinforced main gearbox.
The H225M is suitable for missions including tactical troop transport, special operations and combat search and rescue.
H225M with rocket launcher and in-flight refuelling probe on the left and 20mm cannon on the right.
The five-bladed fully composite main rotor gives a low level of vibration.
The military version can carry a higher payload at a faster speed with an increased range.

The H225M (previously known as EC 725) medium-sized (11t), twin-engine helicopter is a member of the Cougar helicopter family developed by Eurocopter. The aircraft has been developed in the military H225M version and a civil EC 225 version.

The helicopter completed its first flight in November 2000 and is now in service in ten countries worldwide. The French Air Force, the launch customer, ordered six H225Ms for use in a combat search-and-rescue (CSAR) role. The first was delivered in February 2005 and deliveries concluded in May 2007. The French Special Operations Command ordered eight H225M helicopters in November 2002.

French H225M helicopters were deployed in 2006 in Lebanon to aid evacuation of personnel, as well as in Afghanistan. Two helicopters have been stationed in Kabul since the beginning of 2007 in support of the Nato International Security Force. The H225M is used for more than 95% of operations in Kabul.

Orders and deliveries of Eurocopter’s helicopter

Malaysia announced the selection of the H225M for an initial order of 12 helicopters in September 2008. However, the contract award has been indefinitely delayed due to budgetary constraints. Eurocopter signed a cooperation contract with the Malaysian Ministry of Defence at the 49th Paris Air Show in June 2011, related to the supply of the 12 H225M helicopters to the Royal Malaysian Air Force (RMAF) for search-and-rescue (SAR) operations.

These new aircraft replaced the existing fleet of Sikorsky S-61 Sea King rotorcraft. The first two helicopters were delivered in December 2012 and the remaining units were delivered between 2013 and 2014.

The first indigenously-built H225M helicopter was delivered to the Brazilian Navy in June 2014. A total of 28 helicopters were handed over to the Brazilian Armed Forces by May 2017. Deliveries are scheduled for completion by 2022.

In March 2010, the Mexican Air Force ordered six H225M helicopters from Eurocopter. These will be used for transport and civil security missions. Another six H225M rotorcraft were ordered by the Mexican Air Force in September 2010, increasing the total number of aircraft orders to 12. The Mexican Navy ordered nine H225M helicopters to carry out CSAR, medical evacuation (MEDEVAC) and troop transport missions.

In July 2009, the H225M was presented on the static display at the Royal International Air Tattoo, at RAF Fairford. In September 2009, it was displayed at Defence Systems & Equipment International event, held in London, UK.

The new H225M is based on the proven fuselage and structural design of the Cougar mk2, with a new five-bladed main rotor and reinforced main gearbox. The helicopter also has a new integrated display suite and piloting system. The new H225M version is able to carry a much higher military payload at a faster speed, while it also has an increased range.

Eurocopter received a letter of intent (LoI) from the Republic of Kazakhstan to deliver 20 H225M helicopters in May 2012.

In September 2012, the Royal Thai Air Force (RTAF) ordered four H225M search and rescue helicopters, with deliveries concluded in August 2015. Two more helicopters were ordered in 2016 and were delivered in October 2018. RTAF placed an order for next set of four H225Ms in September 2018, which will bring RTAF’s H225M fleet to 12 units by 2021.

The Kuwait Ministry of Defence ordered 30 H225M helicopters in August 2016.

In November 2016, Airbus Helicopters signed a contract with the Singapore Ministry of Defence to deliver an undisclosed number of H225M medium-lift helicopters.

Boeing secured an order from Hungary for the delivery of H225M helicopters in December 2018.

Capabilities of the H225M Cougar

Design features of the twin-engine helicopter

The fuselage is of light alloy material with a large composite intermediate structure and cowlings. The machine-milled frames are strengthened for crashworthiness. The crew and troops are protected by removable armour plating. The maximum seat capacity is two crew and 29 troops.

H225M helicopter is fitted with a dual hoist system and has a sling capacity of 5t.

The helicopter is equipped with new ‘Spheriflex’ main and tail rotorheads with a diameter of 6.2m. The five-bladed main rotor is fully composite, with a composite spar, multiple box structure and anhedral tipcaps. The five-blade arrangement provides a very low level of vibration. The rotors and horizontal stabiliser can be equipped with an anti-icing and de-icing system.

The H225M is equipped with an all-glass cockpit, with new avionics and a new integrated display system, including a digital map. 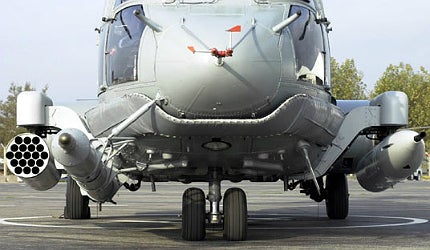 The helicopter can also be fitted with axial pods, such as two 68mm rocket launchers or two 20mm cannons

The SAR system can be programmed to provide automatic search patterns, transition and hover.

The helicopter is powered by two Turbomeca Makila 2A turboshaft engines, each providing 1,800kW of power, an increase of 14% over the previous 1A2 engine version.

“H225M is equipped with an all-glass cockpit, with new avionics and a new integrated display system including a digital map.”

Each engine, complete with systems and accessories, is independent. An infrared suppression system is installed to reduce the thermal signature of the helicopter.

The main 2,539l fuel tanks are installed beneath the floor of the cabin. Auxiliary tanks can be installed in the cargo hook well (capacity of 324l) or at the rear of the cabin (990l). The helicopter can be equipped with a probe for air-to-air refuelling. The refuelling system has already been validated on the Cougar mk2.

H225M’s main gearbox is reinforced for compatibility with the increased turbine engine power and the increase in the helicopter’s maximum weight. The helicopter uses the gear train identical to that of the Cougar mk2. An emergency lubrication spray is installed in the gearbox to allow a 30-minute flight with no oil.

The helicopter has retractable crashworthy tricycle-type landing gear supplied by Messier-Bugatti. Each unit retracts rearward and is fitted with dual chamber oleo pneumatic shock absorbers. Emergency floatation units can be installed on the main landing gear fairings and on the forward section of the fuselage.

Performance of the Cougar-family helicopter

Tiger is being built by Eurocopter, a subsidiary of the EADS (European Aeronautics Defence and Space) company formed by DaimlerChrysler Aerospace of Germany, Aerospatiale Matra of France and CASA of Spain.