Expand
7th operations support squadron airmen flashing a signal light from the base's air traffic control tower.
Thunderbirds of the USAF preparing to take-off from the Dyess base during the Dyess Big Country air festival.
B-1 bomber displayed along with its massive munition capability during the first-ever B-1 munitions capability layout photo shoot.
Members of 317 AG and 7 BW board a flight at the Dyess base, for deployment in to southwest Asia.
7th operations support squadron senior airman monitoring flightline operations.
Headquarters of the 7th Bomb Wing deployed in the DYS.
Main Gate Entrance of the Dyess air force base.
C-130J takes off from the Dyess base during a mass air drop exercise. 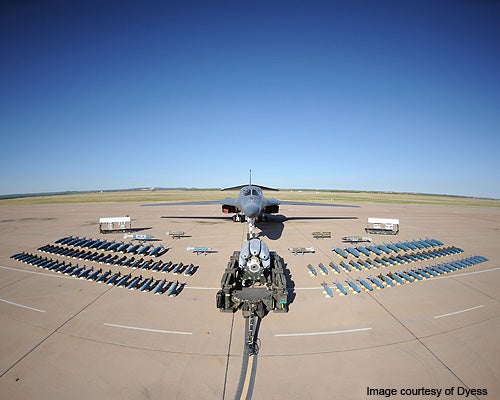 The base is owned by United States Air Force (USAF) and operated by Air Combat Command (ACC). It is currently used as a military air force base and supports the pilot training and air lift capabilities for the USAF.

About 13,000 military and civilian personnel are currently residing at the base.

News about secret transfer of nuclear weapons from the Dyess air force base became viral in September 2013, but the base denied of any such transfer and termed the information as inaccurate.

History of the Dyess Air Force Base

"About 13,000 military and civilian personnel are currently residing at the base."

The US Army Air Force initially built the Dyess Air Force Base under the designation of Tye Army Air Field (TAF) in an effort to meet the requirements of World War II. The TAF was renamed as Abilene Army Airfield (AAF) in April 1943.

After WWII, AAF was transferred as sub-base to the Fort Worth Army Airfield, who in turn sold it to the City of Abilene. After being used as a training facility for the Texas Army National Guard, the air field was decided to be renovated for use as a military installation in the Korean War.

The City of Abilene raised $1m to procure 3,500 acres of land for the expansion and the US Government sanctioned $32m in July 1952 for the construction.

The renovation began in September 1953 and the air field was renamed as Abilene Army Air Base (AAB) in October 1953. The AAB was inaugurated in April 1956. It was renamed as Dyess Air Force Base in December 1956 in honour of Lt Col William Edwin Dyess, who had endured the Bataan Death March and provided one of the few eyewitness accounts.

In January 2003, DYS became the first USAF base to utilise renewable wing energy. It is one of the most environmentally friendly bases in the US. Siemens supplies electric power to the base by converting municipal solid waste (MSW) or biomass into electrical energy.

Design and construction of the Texas base

Construction of two 5,000ft runways, taxiways and aprons was finished in 1943. The renovation of the runway and taxiway system, airman dormitory and primary utility system were accomplished in 1955. Medical care facilities and Capehart housing complex were built in September 1956 and 1958 respectively.

The runways, taxiways and aprons were rehabilitated to accommodate B-47s and B-52s in December 1963. A tri-service landing mat asphalt runway was built in December 1966.

Extension of hangars and concrete areas to accommodate additional B-52s was completed in 1968. Short field runways were constructed in 1975.

The old runways and parking areas still exist on the west side of the base.

Garrison facilities at the Air Combat Command operated base

The base serves as headquarters for Air Combat Command (ACC) which is comprised of the 7th Bomb Wing (7BW) and 317th Airlift Wing (317AW). The 7BW was activated in April 1997 to execute combat training missions using B-1B Lancer Bomber aircraft.

"The old runways and parking areas still exist on the west side of the base."

The base also serves as the headquarters of the Air Force Office of Special Investigations (AFOSI) Detachment 222.

The DYS can accommodate C-130 Hercules medium transport aircraft and B-1B Lancer Bomber aircraft. A 5,000ft runway surfaced with asphalt was built in 1943.

In addition, the base features a 13,500ft runway surfaced with asphalt to accommodate B-47 and KC-97 aircraft. It also boasts two asphalt surfaced 3,500ft runways.

In December 1999, Raytheon Systems Ltd was awarded an $860m contract for the development of the UK Ministry of Defence airborne stand-off radar (ASTOR).