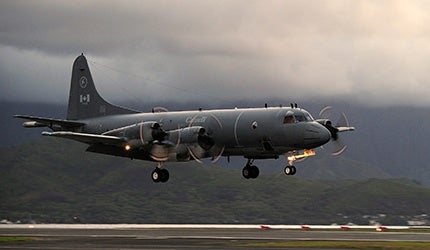 The CP-140 Aurora is the only strategic maritime surveillance aircraft in service with the Royal Canadian Air Force (RCAF). Primarily intended for anti-submarine warfare (ASW) missions, the aircraft can be used to conduct maritime surveillance, and search and rescue operations. It can also be deployed to detect drug trafficking, illegal fishing, immigration and pollution along the coastline.

The CP-140 aircraft were deployed in Operation Apollo in the Persian Gulf between late 2001 and mid-2003. The aircraft performed maritime patrol missions in the Libyan waters under Operation Odyssey Dawn and Operation Unified Protector. The CP-140 fleet performed 500 air patrol exercises as part of Canada’s role in the international effort against terrorism.

"The CP-140 Aurora is the only strategic maritime surveillance aircraft in service with the Royal Canadian Air Force (RCAF)."

The CP-140 Aurora emerged as a winner in the Canadian Long-Range Patrol Aircraft competition in 1976, with he first aircraft acquired by the RCAF in 1980 to replace the CP-107 Argus. The production CP-140 was closed in 1991 for commencing the production of the P-3 Orion. The three surplus airframes were delivered to Canada without anti-submarine equipment – these aircraft were designated as the CP-140A Arcturus and used for non-ASW roles.

In November 2008, Lockheed Martin was awarded a $156m contract by the Department of National Defence to execute the P-3 Aircraft Service Life Extension Programme (ASLEP) for the CP-140 fleet of the RCAF. Under the contract, ten CP-140 Aurora aircraft were equipped with new outer wings, centre wing lower surfaces, horizontal stabilisers and associated components. The Life Extension Kits will extend the service life of the aircraft by additional 20 to 25 years.

The Boeing CF-18 Hornet (military designation: CF-188) is a multi-role combat aircraft designed and manufactured by McDonnell Douglas which is currently part of Boeing Integrated and Defence System (BIDS), US.

The CP-140 Aurora is the Canadian version of the P-3 Orion maritime patrol aircraft, in service with the US Navy. Based on the P-3C Orion airframe, the CP-140 incorporates avionics of the carrier-based S-3A Viking aircraft.

The CP-140 Aurora is designed to detect and destroy new-generation stealth submarines. It can also perform search and rescue (SAR) missions using its air-droppable survival pods. The long-range and high-endurance of the aircraft make it ideal for wide variety of operations.

The aircraft has a length of 35.61m, wingspan of 30.37m and a height of 10.30m. The maximum gross weight of the aircraft is 64,410kg. The CP-140 accommodates two pilots, one flight engineer, four navigators and three airborne electronic sensor operators. The crew size varies, pending on the mission.

The mission avionics systems of CP-140 Aurora are currently being upgraded under the Aurora Incremental Modernisation Project (AIMP). The work under the programme includes the installation of a new navigation and communication systems, mission computer and sensors.

The CP-140 Aurora is armed with Mk 46 Mod V torpedoes. The Mk 46 can strike high-performance submarines within the range of 11km. The torpedo can carry a PBXN-103 high explosive warhead. The aircraft can be retrofitted with air-to-surface rockets or conventional bombs. The CP-140 also carries signal chargers, smoke markers and illumination flares.