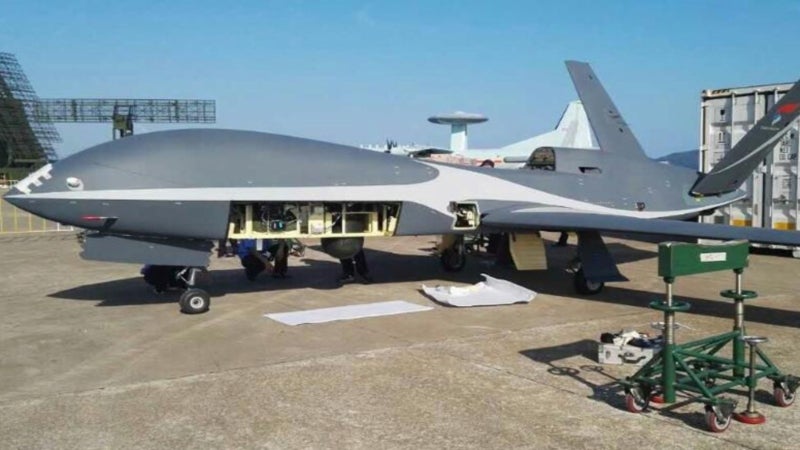 The UAV is offered in two variants, attack, and intelligence, surveillance and reconnaissance (ISR). The combat version comes with a number of weaponry options to defend ground-based enemy targets, whereas the ISR variant is provided with payloads to assist armed forces in missions such as border reconnaissance, battle damage assessment, observation, and monitoring.

The UAV’s wings, fuselage and tail sections are built using composite materials. Its length and heights are 9m and 3.66m respectively and it has a take-off weight of 3,000kg and a payload capacity of 400kg.

Take-off and landing of the aircraft is assisted by a tricycle type landing gear, consisting of one single-wheeled steerable nose leg and two single-wheeled main gears.

The payloads and sensors are stored in the UAV’s bulbous nose assembly, while the propulsion system is placed at the rear.

The EO / IR turret incorporates high-resolution imaging sensors to capture high-definition imagery and video in real-time. Additionally, a single camera is mounted in the nose to assist operators in observation and surveillance activities.

Detection and tracking of moving objects is performed by the onboard synthetic aperture radar.

The armed variant of the Cloud Shadow drone comes with six hardpoints, three under each wing and with a capacity to hold up to two weapons, to carry a range of Chinese air-to-surface missiles and glide bombs to engage surface targets.

The Cloud Shadow HALE unmanned aerial vehicle can execute tasks either autonomously using the onboard autopilot or can be controlled remotely by its operators from the ground control station.

"The UAV is designed and manufactured by Chengdu Aircraft Industry Group, a subsidiary of Chinese aerospace and defence firm Aviation Industry Corporation of China (AVIC)."

The video imagery, telemetry and ISR data is downlinked to the ground segment using a secure communication link. The data is stored and analysed by the UAV operators to verify air traffic, as well as conduct ISR duties.

In the manual mode of operation, the operator sends mission commands to the aircraft via the data link.

The UAV is designed to cruise at altitudes of 14,000m and has the ability to transmit data to a distance of 290km within the line of sight. With a 1,000kg fuel tank onboard, the aircraft can stay in air for up to six hours.