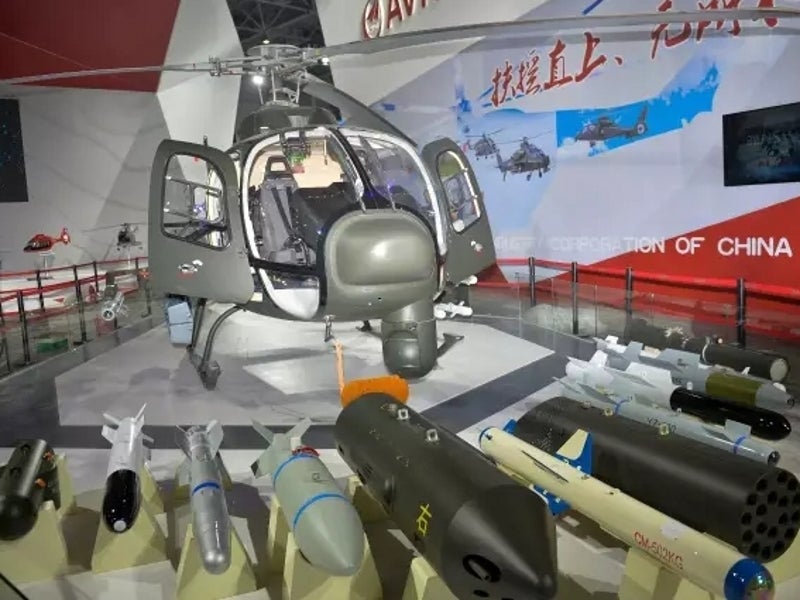 Z-11WB ‘Kuang’ (Buzzard) is a new reconnaissance and light attack helicopter developed by AVIC Changhe Aircraft Industry (Group) Corporation (CHAIC). It is a militarised version of the AC311 multi-role civil helicopter, which is also a derivative of the Z-11 light utility helicopter.

The Z-11WB helicopter made its first flight in September 2015 and was exhibited to general public for the first time at the Airshow China 2016 exhibition in November 2016. It is expected to enter service with the Chinese Armed Forces in 2017.

The helicopter integrates a teardrop-shaped composite airframe and conventional single main-rotor plus tail rotor configuration. The three-bladed main rotor is mounted on the centre of fuselage, while a single turbo-shaft engine is installed within the body. The under fuselage is mounted with a skid-type landing gear.

The helicopter accommodates a pilot and up to three troops. The rear cockpit can be installed with two sets of seats, which can be folded to install pintle-mounted weapons. The rotorcraft also integrates a nose-mounted electro-optical pod.

The Z-11WB can carry a range of weapons and equipment weighing up to 976kg. It is capable of housing pintle-mounted weapon systems such as the Norinco 40mm LG3 automatic grenade launcher (AGL) and 7.62mm CS/LM12 six-barrelled mini-gun.

The helicopter features pylons to carry missiles and bombs. The weapon pylons on either side of the fuselage can be hinged with a quad launcher for Tian Lei 2 (TL-2) air-to-ground missiles. The TL-2 laser-guided missile is intended to engage small land and naval platforms, as well as personnel. The rotorcraft also carries an AG-300/M air-to-surface missile and a SW-6 (Sky Wing 6) air-launched tactical unmanned aerial vehicle (UAV).

"The Z-11WB helicopter made its first flight in September 2015 and was exhibited to general public for the first time at the Airshow China 2016 exhibition in November 2016."

The TY-90 missile has a speed of Mach 2 and can engage targets within the range of 6km, whereas the CM-502KG missile can carry an 11kg warhead for a range of up to 25km.

The rotorcraft is equipped with a WZ8D turbo-shaft engine, a license-built variant of Turbomeca Arriel 2B1A engine. The power-plant produces a maximum power output of 632kW.

The helicopter has a maximum speed of 278km/h and a tank with a storage capacity of 535l of fuel provides it a maximum operational range of 680km. The Z-11WB can climb at a rate of approximately 8.3m/s.