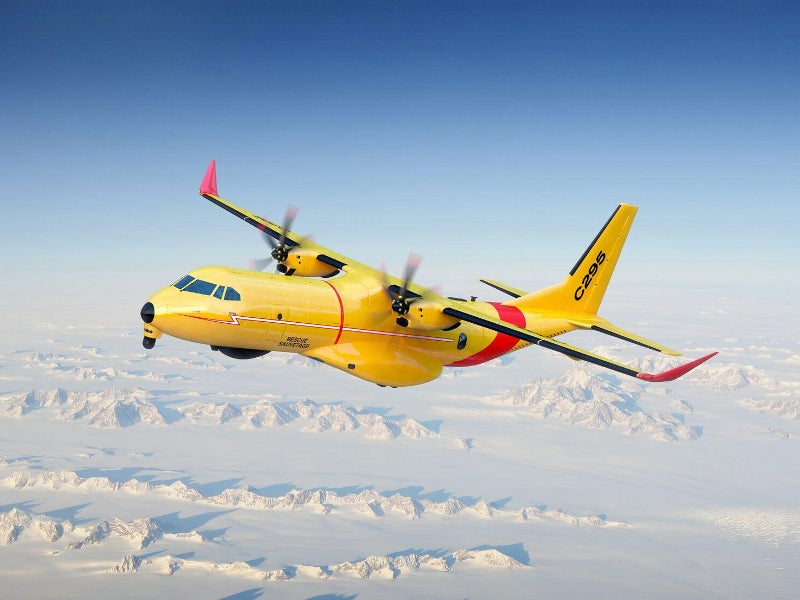 The Government of Canada is procuring a new fleet of 16 C295W twin turboprop fixed-wing aircraft configured for search-and-rescue (SAR) missions from Airbus Defence and Space for the Royal Canadian Air Force.

The new C295W search-and-rescue aircraft will be used to perform critical SAR duties in the North Atlantic and Arctic region and mountains.

Scheduled to be delivered between 2019 and 2022, the C295W SAR aircraft are intended to replace the Royal Canadian Air Force’s existing search and rescue fleet comprising six CC-115 Buffalo and ten CC-130H Hercules aircraft.

Brazil placed an order for three C295W SAR aircraft in July 2014. Airbus also received a contract from the Brazilian Air Force for an additional aircraft in January 2018. Deliveries are scheduled to conclude in 2020.

Airbus Defence and Space received a prime contract award worth $2.4bn from the Government of Canada in December 2016 for the delivery of 16 C295W aircraft in a search-and-rescue configuration for the Fixed-Wing Search and Rescue (FWSAR) aircraft replacement programme.

Airbus will provide engineering, training, maintenance and in-service support services for the aircraft under the contract, which has a base period of 11 years. In addition, the company will build a new simulator-equipped training complex in Comox, British Columbia, Canada, to provide training for the C295W pilots.

Canadian-based simulation and training services provider CAE is responsible for the supply of full flight simulators.

Airbus Defence and Space, in collaboration with Provincial Aerospace, formed a joint venture designated AirPro SAR Services (AirPro) for providing repairs, upgrades and deport level maintenance for the FWSAR programme for a period of 20 years.

The Royal Canadian Air Force’s C295W search-and-rescue aircraft will have a 41ft pressurised cabin with a large floor area. It is manned by two pilots, two SAR technical personnel, one flight engineer and one air combat systems officer.

The aircraft features fixed-wing design with a wing span of 25.81m and a wing area of 59m². Blended winglets are attached to the wings to improve the aircraft’s operational efficiency.

A long ramp door is fitted in the rear of the aircraft to provide easy access for survivors, search and rescue equipment and personnel.

The onboard digital avionics provide flight safety and enhanced mission effectiveness, while reducing the pilot workload.

The aircraft is also fitted with a FITS (Fully-Integrated Tactical System) mission system, which integrates the tactical information and mission sensors.

Canada’s C295W SAR aircraft will be equipped with a MX-15 multi-sensor imaging system beneath its nose to localise, track, identify and detect targets in day / night and difficult weather conditions.

“The new C295W search-and-rescue aircraft will be used to perform critical SAR duties in the North Atlantic and Arctic region and mountains.”

Developed by L-3 Wescam, the payload system can house up to six high-definition imaging and laser sensors such as laser rangefinder, laser illuminator, and electro-optical / infrared (EO / IR) cameras.

A multi-mode search radar is fitted under the fuselage to provide an unobstructed 360° field of view. It can detect, recognise, classify and track both land and water-based objects such as fishing vessels, merchant ships, inflatable boats and small craft up to a distance of 200nm.

The SAR aircraft also features an automatic identification system (AIS) that is capable of transmitting and receiving text messages. The AIS is used to identify and locate aircraft, ships, land-based installations, and navigational aids with AIS transponders.

Mounted on the wings, each engine drives a six-blade propeller, providing high manoeuvrability and an enhanced operation in hot and high conditions.

The maximum cruising speed of the C295W search and rescue aircraft is 260kt and the cruising altitude is 25,000ft. The aircraft is designed to withstand extreme variations in temperature.