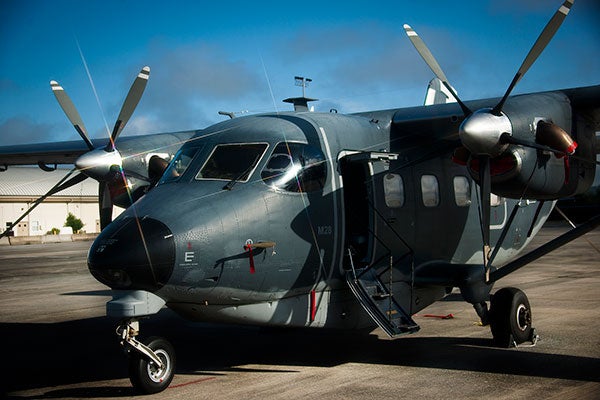 The C-145A Skytruck is a light cargo and troop transport aircraft designed and manufactured for the US Air Force (USAF). The aircraft is primarily used to assist Aviation Foreign Internal Defence (AvFID) missions of the Air Force Special Operations Command (AFSOC).

The C-145As were deployed to support theatre special operations commands in Afghanistan and eastern Africa. The Air Force Special Operations Warfare Center operates up to ten C-145A Skytrucks and is expected to deploy an additional six by 2015.

The C-145A Skytruck is a variant of PZL M28 Skytruck light twin-engine aircraft manufactured by Polskie Zaklady Lotnicze (PZL) Mielec, a Sikorsky company, based in Poland. The PZL M28 Skytruck is a licence-built version of the Antonov An-28 and is in service with the Polish Air Force, Vietnamese Air Force, Polish Navy, Royal Nepalese Army Air Service, Venezuelan Army and Indonesia Air Police.

The flight deck accommodates a crew of three including two pilots and one loadmaster. The aircraft can carry a total of 16 passengers or 10 combat rigged paratroopers based on the mission requirements. It is capable of performing airland and airdrop of cargo up to a maximum capacity of 2,400lb.

The versatile C-145A Skytruck aircraft is equipped Honeywell BendixKing avionics suite for better control of the aircraft during both day and night. The flight deck is fitted with an autopilot and dual electronic flight instrument system (EFIS).

"The flight deck accommodates a crew of three including two pilots and one loadmaster."

The C-145A Skytruck is powered by two PT6A-65B turboprop engines manufactured by Pratt and Whitney. Each engine drives five-blade HC-B5MP-3 constant-speed propellers and produces a power output of 1,100shp at a rate of 1,700rpm.

The C-145A operates at a service ceiling of 25,000ft with an on board supplemental oxygen equipment. It performs take-off and landing at 1,000ft, with maximum gross weight. The propulsion system enables the aircraft to fly at a maximum cruise speed of 223kt and to a maximum range of 1,010nm.