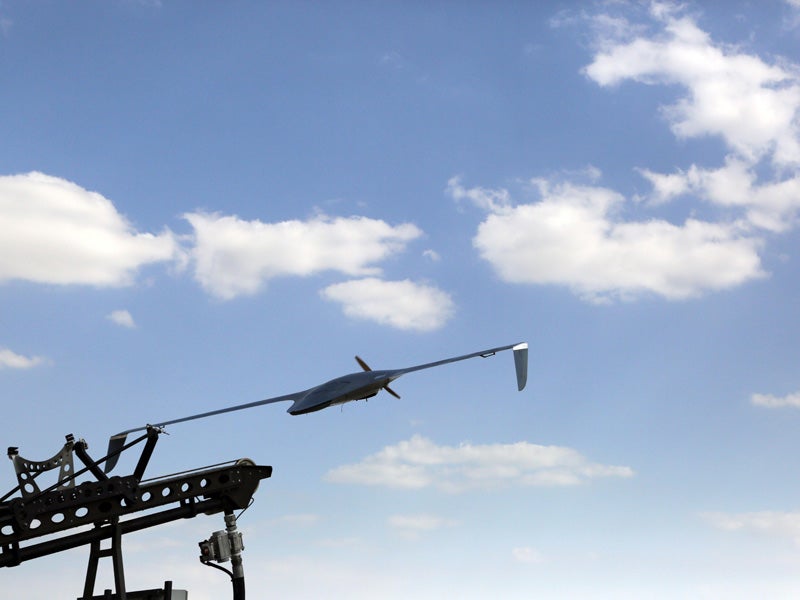 The UAS is intended for a variety of military and paramilitary missions such as over-the-hill intelligence, surveillance, target acquisition and reconnaissance (ISTAR), patrol, urban operation, counter-terrorism, convoy escort, radio relay, and law enforcement.

The UAV features a flying wing design with a wing span of 4m. It is launched by a lightweight catapult launch system installed on a ground vehicle.

A fail-safe recovery system, comprising parachute and airbag, ensures safe landing of the UAV. When recovered, the drone flips over and lands on its back with the help of a parachute.

It has the ability to perform autonomous operations from take-off to landing using an automatic take-off and landing (ATOL) system. It also boasts point take-off and point recovery capabilities.

With a maximum payload weight of 5.5kg, the Bird-Eye 650D tactical UAV can be configured with multiple sensor systems including MiniPOP and MicroPOP electro-optical stabilised payloads, T-STAMP camera, and other electronic payloads.

The tactical air system’s ground control unit consists of a monitor, remote video terminal and ground control equipment. It receives and processes the real-time imagery, videos, telemetry and other data captured by the UAV sensors.

"The UAS is intended for a variety of military and paramilitary missions such as over-the-hill intelligence, surveillance, target acquisition and reconnaissance (ISTAR), patrol, urban operation, counter-terrorism, convoy escort, radio relay, and law enforcement."

The UAV is powered by a single engine that runs on petrol fuel. The engine drives a two-blade propeller mounted at the forward portion.

The Bird-Eye 650D small unmanned aerial vehicle has a cruising speed of 40kt and a maximum speed of 80kt. It can operate 15,000ft high and reach up to a range of 150km. Its gross take-off weight is 30kg and flight endurance is more than 15 hours.

The drone has low visual and acoustic signatures and offers flexible operation at long ranges.

This project forms part of our recent analysis and forecasts of the global Unmanned Aerial Vehicles (UAV) market available from our business information platform Strategic Defence Intelligence. For more information click here or contact us: EMEA: +44 20 7936 6783; Americas: +1 415 439 4914; Asia Pacific: +61 2 9947 9709 or via email.