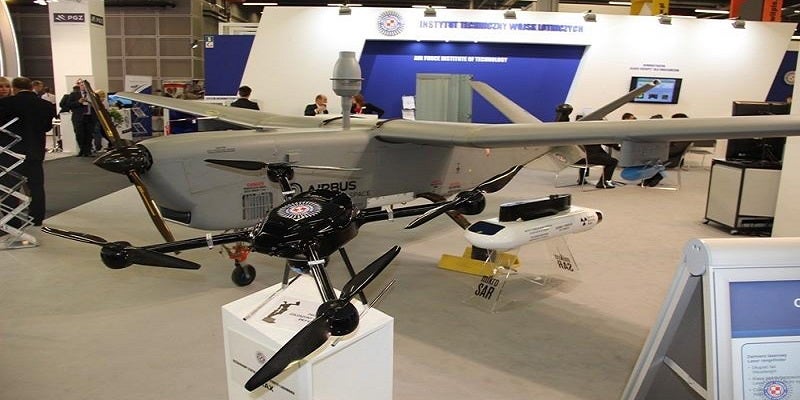 The military variant is intended for use in reconnaissance, surveillance, and search-and-rescue (SAR) missions. The Atrax can be used by the police or government agencies in various applications such as natural disaster assessment, patrolling urban areas, pollution study, protection of critical infrastructure, as well as monitoring forest areas, high-voltage power lines, pipelines and railway infrastructure.

"The UAV was first exhibited during the 13th Balt Military Expo held in Gdańsk, Poland, in June 2014."

The Atrax rotorcraft system consists of an unmanned aerial vehicle, ground control station (GCS), antenna assembly and transport unit. The entire system can be carried in a backpack.

The quadrotor helicopter features lightweight, compact design with four foldable arms and coaxial rotors, made of glass and carbon-fibre composite materials. It uses a skid-type landing gear for take-off and landing.

With a take-off weight ranging between 7kg and 22kg, the drone can carry payloads of 3kg and lift loads of 15kg.

It can operate in both autonomous and remote control modes. In the autonomous mode of operation, the UAV uses an autopilot to reach predetermined waypoints loaded onboard. It has the ability to return to its base point in the event of loss of communication with the ground station through a predetermined flight path.

A digital data transmission system facilitates secure two-way communication between the helicopter and its GCS.

A three-axis optoelectronic system, mounted under the belly, offers full 360° coverage of the designated area. The onboard day / night and thermal imaging cameras collect high-definition imagery and video in real-time. The rotorcraft also features a laser rangefinder.

The military version can carry non-lethal weapons such as smoke grenades and stun grenades.

The real-time imagery and video data are transmitted to the ground control station, where the operator remotely monitors the air vehicle and payloads using a rugged computer. The flight parameters are displayed on the computer screen.

During a mission, the operator can modify flight routes or waypoints based on the mission needs.

Each of the four arms is fitted with two independent electric motors, driving two-blade counter-rotating propellers. The UAV’s VTOL capability allows it to perform missions in hard-to-reach areas, while its multi-rotor design provides increased stability and manoeuvrability. It has the ability to continue flight in two-engine-inoperative condition.

The Atrax unmanned helicopter has an optimal speed of 20km/h and a maximum speed of 80km/h. It can perform rectilinear flights up to 30km and transmit information over a range of 5km. It has an endurance between 45 minutes and one hour and can fly up to an altitude of 1,000m.