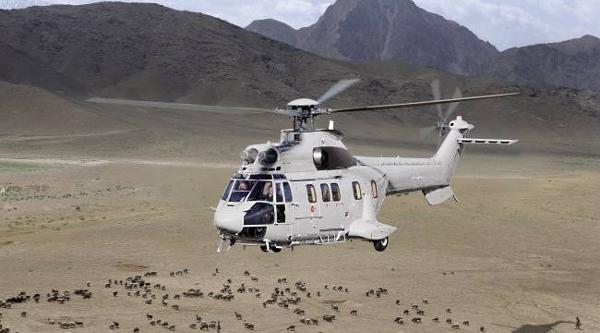 Other variants in the Super Puma family include AS332L1e and EC225.

It will be one of the fastest fixed-wing helicopters in the world, with a projected speed of 407km per hour.

Greek authorities signed a $60m contract for the procurement of AS332 C1 Super Puma helicopters for use by the Greek Merchant Marine in maritime surveillance and SAR missions in the fourth quarter of 1998. The first and second helicopters were delivered in December 1999 and the next two in March 2000.

The Greek Air Force signed a contract worth €100m ($124.62m) to purchase four helicopters, with an option for another two, for CSAR and SAR duties in December 2000.

Airbus Helicopters signed a contract with the Bolivian Air Force (FAB) in January 2014 for the supply of six AS332 C1e helicopters with logistical support package. The helicopters are intended to performing fight drug trafficking, civil security and public service duties across the country. The first and second AS332 C1e Super Pumas were delivered in August and December 2014 respectively. Deliveries are expected to conclude in 2016.

AS332 C1e design and features

The AS332 C1e Super Puma helicopter features a four-bladed, composite main rotor fitted with gust and droop stops. The tailcone is constructed in monocoque structure and is equipped with a five-bladed anti-torque rotor.

The helicopter is attached with a retractable, tricycle landing gear. The main landing gear features trailing arm design, while the nose landing gear has a caster wheel.

The Super Puma has a length of 18.70m, rotor diameter of 15.08m, and a baseline weight of 4,800kg. It can carry a maximum cargo sling load of 4,500kg and a useful load of 4,195kg. It is attached with a hoist with a capacity of 272kg and jettisonable life rafts to carry additional loads.

Its cabin accommodates up to 17 passengers and features two jettisonable sliding doors fitted with two windows each. Three windows are located on both sides of the cabin to facilitate emergency exit. The cabin can also be equipped with up to six stretchers for medical evacuation missions. A special single-step door is attached to the aft fuselage compartment.

Additional equipment onboard the AS332 C1e include a fire extinguisher, anti-smoke equipment, and a system for flight in moderate icing conditions.

"The Super Puma helicopter can fly at a cruise speed of 260km/h and a maximum speed of 278km/h."

A Thomson-CIF CLIO FLIR sighting system is fitted for SAR operations during night time. The helicopter is equipped with a Bendix 1500B radar for the detection of small boats at long ranges. It also features a Spectrolab searchlight and loud hailers.

The AS332 C1e Super Puma multi-mission helicopter is powered by two Turbomeca Makila 1A1 turboshaft engines, which generate a maximum emergency power of 1,400kW each. It is also installed with a fuel system of 1,556l capacity.

The Super Puma helicopter can fly at a cruise speed of 260km/h and a maximum speed of 278km/h. It can climb at a rate of 8.2m/s, offering a maximum range of 642km. It can carry out missions for more than 195 minutes without reserve at a speed of 70k.

AS332 C1e can be operated at high-altitudes and in difficult-to-reach areas, withstanding temperatures ranging from -45°C to 50°C.