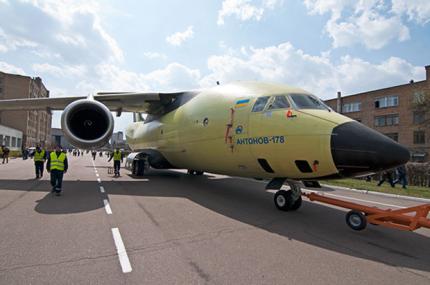 An-178 is a short-range medium-airlift transport aircraft currently under development by Antonov, a company based in Ukraine. The first An-178 prototype was rolled out in Kyiv on 16 April 2015.

The aircraft will be available in both civil and military configurations, and will replace the ageing aircraft such as Antonov An-12, Antonov An-26 and Antonov An-32.

Construction on the second An-178 aircraft began in March 2015 while maiden flight of the aircraft is expected to take place in late 2015.

In March 2015, Maximus Air signed an MoU with Antonov to place an order for an undisclosed number of An-178 twinjet civil variants. Maximus will be the launch customer of An-178 aircraft.

Antonov An-70 is a four-engine medium military freighter aircraft designed and manufactured by Antonov ASTC of Ukraine.

The An-178 is based on An-158 aircraft manufactured by Antonov. Its airframe is constructed with aluminium alloys and composite materials. The semi-monocoque fuselage with a circular cross-section integrates moderately swept wings, winglets and a T-tail. It includes retractable landing gear with two main wheel bogies as well as a single nose wheel.

The base platform of the AN-178 can be developed into a number of civil and military variants. The airframe and onboard equipment are unified with AN-148 and AN- 158 aircraft.

The aircraft can carry 99 soldiers, 80 paratroops or evacuate 70 sick and wounded persons. It can be used in a range of missions including logistic support of troops, parachute drooping of cargoes at platforms or small troop divisions, carrying of injured personnel, and transportation of light vehicles. It can also be used to transport and deliver equipment and engines.

"The base platform of the AN-178 can be developed into a number of civil and military variants."

Avionics and performance of the Antonov transport aircraft

The aircraft is fitted with digital avionics, and a glass cockpit. It can fly in intensive air traffic, under VFR and IFR weather conditions both during the day and night times. It can take off and land on unpaved runways and pebble covered surfaces.

The aircraft features a more spacious and fully pressurised cargo compartment, which can carry up to 18t of cargo over 1,000km. It has an onboard cargo capacity of 10t and can achieve a range of more than 4,000km. It can accommodate high capacity 1C containers with a lateral size of 2.44m х 2.44m, as well as maritime containers and IATA containers.

"It also includes a flight simulator for training flight crews."