The bomb was built by munitions personnel following an intricate process ensuring the bomb body is usable by operators.

During the building, the munitions are initially barged, a process that involves receiving, transporting and storing of the explosives.

Once completed, the munitions airmen continue to assemble the bomb. 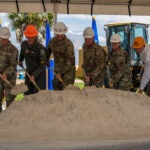 Airmen at Eielson AFB plan to build a total of 70 bombs in a week. The munitions flight will mass-produce bombs.

USAF 354th MXS operations officer Captain Christina Merritt said: “During this process, and depending on the bomb they are building, (munitions personnel) will add a guidance and control unit, tail kit and fuse to a basic bomb body.

“Each of these components work together to make up the type and purpose of the bomb.

“We typically work to build bombs in a mass fashion. Mass builds are done using an assembly line process, where each airman has a particular job and we can produce multiple bombs at once.”

The development will ensure future preparedness of Eielson AFB’s troops.

354th MXS conventional maintenance inspector Airman 1st Class Daelyn Mayer said: “It is very rewarding to be a part of making history. I think it’s awesome to get to say we built the first bombs for the F-35s that are here at Eielson (AFB).”