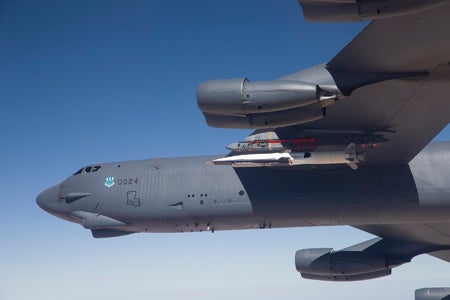 The US Air Force’s (USAF) fourth and final experimental Boeing-built X-51A WaveRider hypersonic jet has successfully completed its flight test, reaching a speed of Mach 5.1, over the Pacific Ocean.

Powered by supersonic combustion scramjet engine, the unmanned vehicle flew for three and a half minutes following release by a B-52H Stratofortress bomber from 50,000ft above the Point Mugu Naval Air Warfare Center Sea Range in California, US.

Accelerated by a solid rocket booster to around Mach 4.8 within 26 seconds of launch, the X-51A rose to Mach 5.1, more than five times the speed of sound, before making a controlled dive into the Pacific Ocean for planned destruction.

Representing the longest air-breathing, scramjet-powered hypersonic flight in history, the six-minute test flight addressed all mission objectives, and provided 370 seconds of data for further analysis, according to the company.

The aircraft, however, flew for more than three minutes at Mach 4.88 speed during its first test flight in May 2010.

Aimed at developing a hypersonic aircraft, Waverider is one of several projects carried out in collaboration with the Department of Defense (DoD) and NASA that may lead to the production of faster missiles.

The programme is jointly managed by a consortium of the Air Force Research Laboratory (AFRL), Defence Advanced Research Projects Agency (DARPA), Boeing and Pratt & Whitney Rocketdyne, and is supported by NASA.