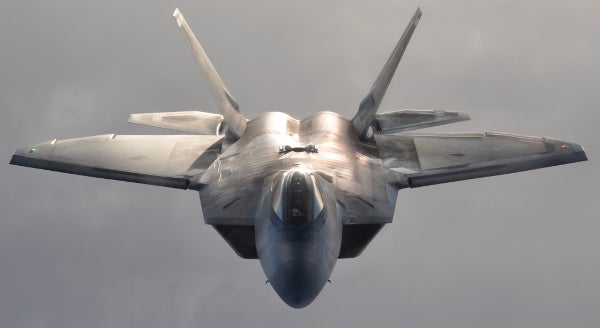 Involving installation of the modified Combat Edge upper pressure garment valve and related hoses, valves and connectors, the actions eliminated a previous requirement to restrict all F-22 flights within a 30-minute flying distance from a suitable airfield to enable quick recovery and landing during an unfavourable event.

The aircraft has also been authorised to conduct aerospace control alert operations, following the installation of an automatic back-up oxygen system (ABOS) in the aircraft based at Joint Base Elmendorf-Richardson in Alaska, US.

Altitude restrictions for training flights on the ABOS-modified Raptors have incrementally been removed, while those on non-ABOS equipped F-22s remain in place.

Ordered from Lockheed Martin along with non-recurring engineering services and ten spares under a $19m contract in June 2012, the ABOS is designed to offer additional protection to F-22 pilots during high-altitude flights, and during demanding oxygen-delivery scenarios.

Since being declared operational in December 2005, the fighter has frequently been grounded due to a series of hypoxia-related incidents, including dizzy spells and blackouts, experienced by pilots between April 2008 and January 2011.

Modifications of Elmendorf-assigned Raptor fleet started in February, and are expected to complete by July 2014.

Image: A USAF’s F-22 Raptor fighter during its flight. Photo: Courtesy of the US Air Force Reserve/Tech. Sgt. Dana Rosso.