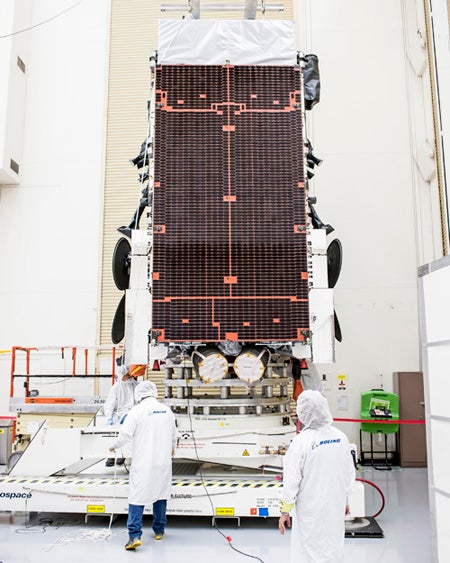 The US Air Force’s (USAF) sixth Wideband Global SATCOM (WGS-6) military communications satellite has been transferred from Boeing’s El Segundo plant to the Shuttle Landing Facility at Kennedy Space Center in Florida, US.

Representing the second WGS satellite to have been delivered by the company to USAF this year, the spacecraft is scheduled to be launched aboard a United Launch Alliance Delta IV rocket from the Cape Canaveral Air Force Station in Florida, US, later this year.

Prior to its launch, the satellite will undergo further testing, fuelling and integration at the Astrotech payload processing facility in Titusville, Florida, US.

Manufactured under a Block II contract received by Boeing in October 2006, the spacecraft is expected to increase bandwidth capacity, coverage and flexibility for the US and allied military forces, following launch in the orbit.

The data provided by the satellite will also be accessed by the Australian Defence Force (ADF) through a memorandum of understanding (MoU) signed with the US Department of Defense (DoD) in 2007.

Meanwhile, WGS-5 satellite is scheduled for launch from Cape Canaveral Air Force Station on 22 May.

Built on the Boeing 702HP platform, WGS satellites are designed to support missions including to and from tactical communications between ground forces and the relaying of data and imagery from airborne ISR platforms.

The first four WGS satellites were successfully launched in 2007, April and December 2009, and 2012, while the WGS-7 to 10 satellites ordered by the USAF under a Block II follow-on contract in August 2010 are currently in various stages of development.

Image: The WGS-6 satellite being readied for delivery to USAF at Boeing’s El Segundo facility in California, US. Photo: Courtesy of Boeing.